Having spent the last couple of weeks with traditional styles of art, I was feeling the need for something more contemporary this week.  It’s been many years since I stopped by View Two, mostly because the prospect of wandering down Mathew Street on a Saturday fills me with horror.  But the gallery itself is a place of calm in the melee of The Stag Do. On my way up the stairs, taking in what else View Two has to offer, I notice a lot of paintings of Liverpool.  Which are fine, and capture somebody’s experiences perfectly well.  But cityscapes to me are a bit like landscapes , and I prefer to come and see the real, living place in its constant state of flux.

The work of Angela Wright is similarly set in the urban world.  But their advantage is that they’re works which could be about anywhere, and which are not of the urban landscape so much as  about the urban experience. 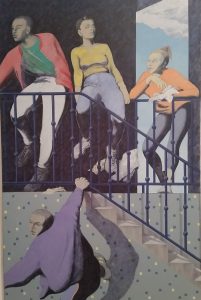 These are not “pretty” scenes.  Indeed, Wright’s source is a world which some people would rather didn’t exist: the world of the high-rise and local precinct.  They’re occupied by the kind of people who (guessing from their dress) the Daily Mail encourages its readers to denigrate and fear.

It appeals to me, Wright’s kind of art.  It’s a theme and style which I’ve seen more of since I started doing this blog.  The kind of art which sees the ordinary – one way of putting it would be the world of the “underclass” – and turns it into something attractive.    It appeals because it goes against what we’re sold everywhere else.  We’re sold the image of the tower block as a symbol of ugliness, which comes with assumptions about the sort of person lives there.  Sometimes these stereotypes may be true, but not always.  And for people who do live in these places, there must still be moments of  fun to be had.  Just as there must have been the intention of good design when these places were built.  It does society good to stop buying into a single narrative and look at the other possible stories. 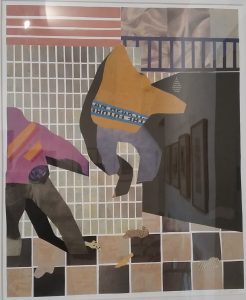 This show is something of a retrospective –  indeed, her first solo exhibition in over 30 years of painting – and there is a little repetition of ideas.  Specifically, several of the large-scale paintings are replicated in collage form on the opposite wall.  It’s interesting to see what the change of medium does to the image.  The figures in the collages are harder to see as individuals, more defined by the labels they’re wearing.   But whilst it’s an interesting comparison, it’s not what I would necessarily do with the space.  I’m intrigued by Wright’s world, and would really like to see more completely different works.

For anyone committed to buying into the aforementioned stereotyped rhetoric, you could read a lot of negativity into her work.  The landscapes are filled with rubbish, the intentions of her figures often uncertain.  But I see this as honesty.  We all constantly walk past discarded pieces of plastic, so why paint them out of the picture, like we’re pretending that reality doesn’t exist?  In some paintings in particular, those of the “Shiny New Buildings”, Wright makes the rubbish so prominent that you can’t ignore it.  But making it aesthetically pleasing is a kind of optimistic painting – look with the right eyes, and there are positives to be found everywhere.  Maybe it’s even the “Shiny New Buildings” – relegated to the background – that are the bigger problem.  Even if you’re not convinced, Angela Wright’s paintings get you to ask questions about the reality of this urban environment, and that’s important enough. 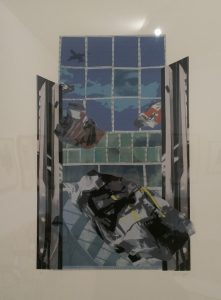 And the Rubbish blows down the Street between the Shiny, High New Buildings.

View Two is open Fridays & Saturdays, or by appointment.