I tend to think of myself as a positive person in all things, including art.  However unsure I am of something, I try to see the best in it, try to work out the artist’s intentions even if I’m not sure the work is that great.  But there’s no getting around the fact that Ryan Gander’s work at Liverpool Biennial 2018 has got me wound up for all the wrong reasons. 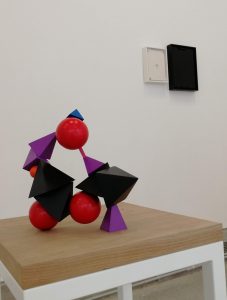 Gander’s project was one of the most publicised in the lead-up to the Biennial, and on paper it sounds great – major contemporary artist goes into local school to inspire and create work with pupils?  What’s not to like?  As a (now former) teacher and critic of arts education in schools, I was so ready to love this.  But in my view, it’s turned out a bit of a mess.

It’s hard to judge purely on the exhibition at Bluecoat, which consists of two elements.  The first is a video of the five pupils Gander worked with interpreting various images, coming up with creative responses to what they might be.  Gallery 3 is then filled with the results of workshops experimenting with arrangements of colours and shapes.  Now I could be wrong, but I sensed Gander’s invisible hand in all of this.  Many people make the mistake, when teaching others, of getting confused as to where the boundary sits for ‘independent’ work.  Just because somebody has made something doesn’t mean that their teacher hasn’t guided them to actually make what the teacher thinks it should look like.  And some of these shapes just have a tad too much..union, or perfection, to convince me they’ve arisen organically from pupils.  That Gander, perhaps even unaware, has been shifting pieces into the desired order.  Saying this, I would never disparage the abilities and potential of children, and I would be happy to be wrong.  Perhaps I’m coloured by what I saw next.

Because what I saw next is the final outcome of all this workshop development.  And these five chairs up outside the Metropolitan Cathedral really got me mad. 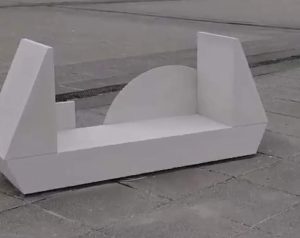 It’s their insignificance that gets me: the extent to which they just left me feeling underwhelmed, thinking “is that it?”.  On a grey day, set against grey concrete, they make almost no impact on their environment.  This would be enough of a problem for a piece which has been set up to be a highlight, even more so when the entire purpose of the exercise of their creation was to inspire.  Because they’re not inspiring.  They’re a far cry even from the whimsicality of the experiments down the hill in Bluecoat.  And why the heck are they white?!  Not only that, but this plateau feels like an isolated place.  I have no sense that this is any meaningful kind of placemaking.

(Oh and since I drafted this before the weekend, I’ve found out that the blocks are apparently designed to be constructed into the shape of the cathedral itself.  But when something that should be that obvious..isn’t..does it matter?  Knowing this doesn’t change my perception of the project’s failures – in a way, it exacerbates the lack of connection between place and art). 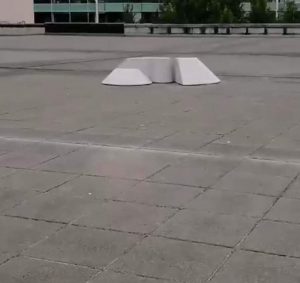 This project is not the only one to work with local schools in this Biennial, but from an outsider’s view is the one with the least impact.  Mohammed Bourouissa’s Resilience Garden will belong to Kingsley Primary School for years to come, and Mae-Ling Lokko’s Hack the Root, whilst also being not that aesthetically special, had a valuable lesson in its concept about working towards creative solutions for future sustainability.  Gander’s chairs are almost the antithesis of such proactive thinking: they represent the dilution of bold thinking.

Gander’s work has infuriated me so much because I expected so much more of it.  It’s inspired by a subject I’m passionate about, and which had innate potential to be entirely inspiring.  Even an inspired failure would have been better than the blandness of the results, though.  In a Biennial full of fascinating moments, It’s the mundane-ness of this project that hurts the most.

1 thought on “A maddening waste”