One of the things I was most – upset? – about when Biennial 2018 announced their programme was that it didn’t give much space for exploring the unknown spaces of Liverpool.  From the Blind School to Toxteth Reservoir, I’ve always loved having opportunities to explore the urban context as much as the art every two years.  But now that I’ve seen it, I like the way they’ve used the venues I’m going to feature in this edition – those within easy reach of Lord Street and the transport hubs.  The works chosen for each space hint at their new homes original purpose without being beholden to it. 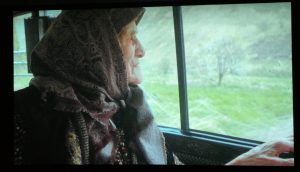 The parts of St George’s Hall used, for example, are the former prison cells and courtroom, and there’s a more political bent to the works chosen here.  This is mostly film art – no fewer than six films dotted around the rooms (use the floor stickers to find your way around).  You’ll find a mixed bag in this warren: I enjoy Inci Eviner’s Reenactment of Heaven – a Biennial commission – for being charmingly mad in how it depicts women’s self-determination (featured image – if I’m honest, it feels like a visual representation of how my brain works).  Others, though undoubtedly covering important political territory, veer too far towards documentary to impress as art – and showing across multiple screens doesn’t change this.  But then there’s the film which is one of my favourite things in the whole Biennial: Aslan Gaisumov’s Keicheyuhea.  It’s a personal and bittersweet piece which follows Gaisumov’s grandmother as the artist takes her back to her childhood home in the Caucasus, from which she was displaced 73 years ago.  It’s about memory, and politics, and change – how things change and what happens when it does.  It’s worth the trip to St George’s Hall to see this alone. 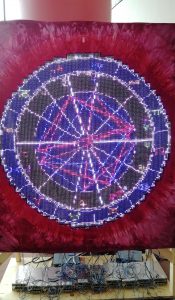 There’s more film over at The Playhouse Theatre, with the auditorium being given over to showing Ari Benjamin Meyers’ untitled film about four Liverpool musicians employing their craft.  Which you’d really think would be completely my thing – but really wasn’t.  The problem with it was that each performance was solo, and silent other than the performer in question.  To a certain extent this does highlight their individual skill, but the predominant overall effect is of disconnect.  We can’t hear the music they’re responding to, so we don’t get to really be a part of this gig.  We’ll never know what Budgie is responding to with tears: this is a frustration, not an element of mystery.

I enjoyed some of the other spaces of the theatre though, including – somewhat surprisingly for me – Ei Arakawa’s Performance People.  A work updated from its original 1980s incarnation, it uses star charts to profile people and artworks.  I’m not a believer in astrology affecting our personalities, but in this piece you get to listen in as it does provide a starting point for psychological analysis either or, or in partnership with, the subject.  The charts themselves are probably nonsense, but I enjoyed listening in to the conversations they started.  I also thought Reetu Sakkar’s film Harano Sur in the rehearsal studio was very effective at portraying a sense of violence. 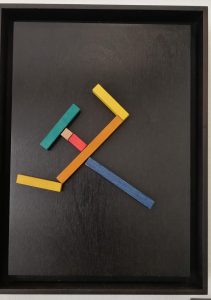 Reading this you could be forgiven that contemporary art is being dominated by film – and perhaps it is, here.  So head over to Bluecoat to discover a healthy mix of sculpture, film, painting and photography.  Abbas Akhavan’s sculpture Variations on a Ghost is a good one – a foot, presumably the only piece left of something much bigger, a commentary on ISIS’ destruction of artworks.  I like its size and especially its material, which really creates the impression that this is an object which has been uprooted – maybe even magically transported by itself – to not let this destruction be forgotten here.  More optimistic is Ryan Gander’s work in Galleries 2 & 3 – playful, although put into a different context by the accompanying artwork outside the Metropolitan Cathedral about which I have a lot to say in a different (upcoming) post.

There’s an ambiguity in Melanie Smith’s film Maria Elena, which is one that tells its story through what it shoots rather than an overabundance of explanation.  We know we’re watching a town attached to a Chilean salt mine, historically attached to one of the richest families in America, and the way the people live now.  Scenes of calm and of violence knit together to give what feels like a nuanced exploration of what the reality of a place like this might be.  Similarly, it’s fun to speculate as to the intentions of the actions in Silke Otto-Knapp’s painting which cover the entirety of Gallery 4’s walls.  Are they delighted or violent, actors or situated in reality?  It’s impossible to know, but fun to speculate.  And spending time thinking about art – not just looking or watching, but considering – is surely what the Biennial’s about.