Today I was able to leave work early and make a visit I’ve been meaning to get around to for a while. Tŷ Pawb opened almost a year ago and sounded an intriguing prospect from day one – an arts, markets and community space in the centre of Wrexham. To be honest I’ve never given much thought to Wrexham as a place, but there was something around the publicity for this venture which sounded ambitious.

I’m not going to speak for the market – late on a Tuesday afternoon, most of the independent stores were either closed or winding down. I’d mostly come to take a look at the exhibitions, anyway. What could I expect to find in the heart of Wrexham? Some very impressive things, as it turns out. 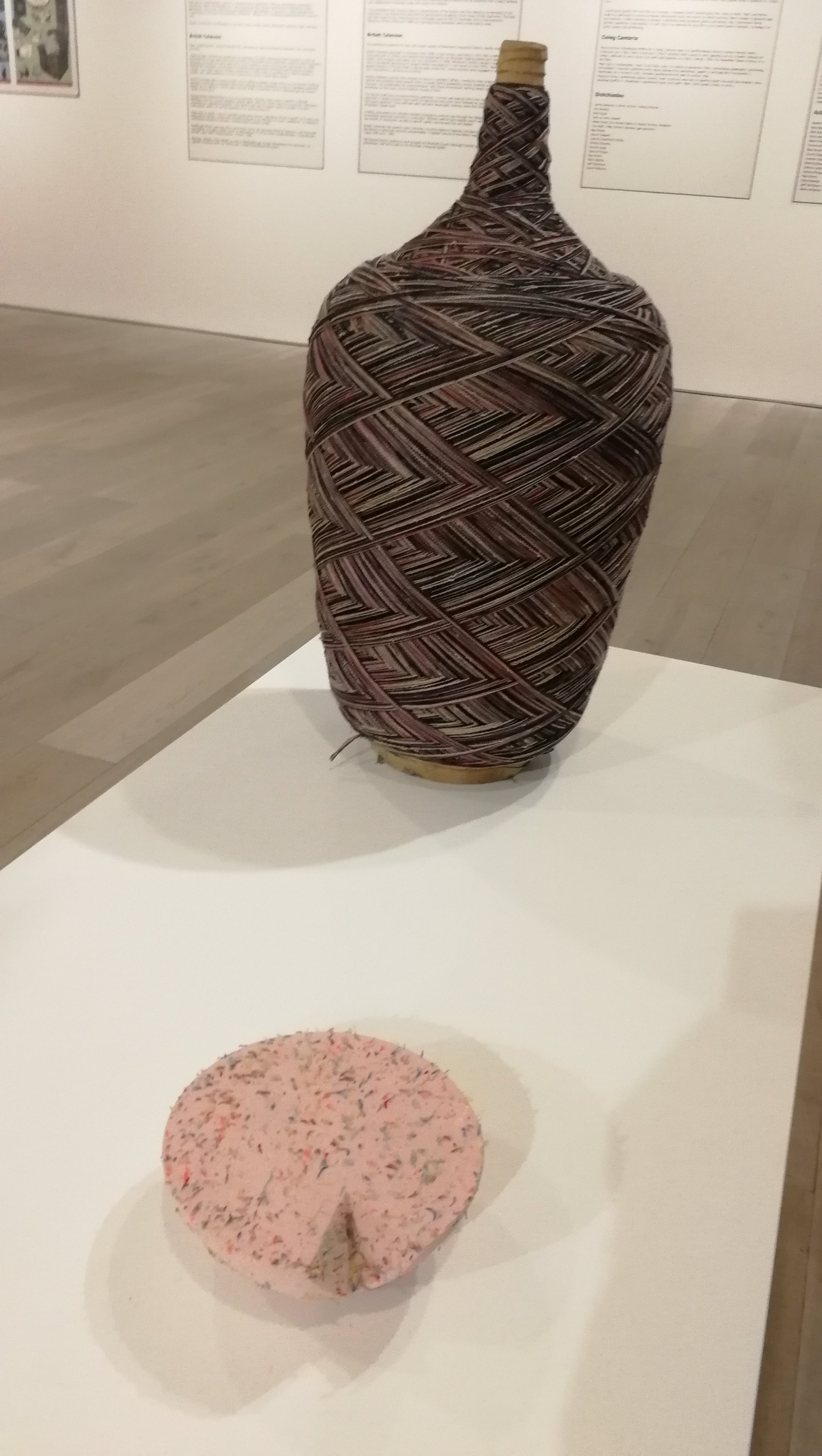 Both exhibitions are in the same room, and you walk first around Uptwist/Downtwist. This is an exhibition inspired by local industrial history of the Celanese factory, which closed down in 1985. Sometimes, if we’re completely honest, these ‘local legacy’ exhibitions can be pretty dull. All too often they’re a record of factory documents and photos, which show you that things were active. What they don’t always do is give you a sense of what this meant – of any kind of significance to the activity that was going on.

Uptwist/Downtwist has the documents, but it’s also framed with a sense of feeling. The main focus is on work by Will Cruickshank. Apparently the Wrexham Celanese factory was the first to introduce artificial fabrics, an innovation arrived at through experimentation. In a mirroring of the question “what can thread do?”, he’s taken the theme of weaving and used it to create different sculptural forms. The main thing which strikes about his works is their solidity. These aren’t ethereal traces, they’re neither fragile nor list. Instead they’re very much corporeal, occupying space. They’re also incredibly tactile. I wanted to feel basically everything – run my fingers though and over threads, piles. I’d even like to use the ‘bowls’ Cruickshank has formed out of thread ends and plaster – apparently a happy accident in terms of concept, but that results in great pieces of sculpture.

The playfulness of the pieces is mirrored in Cruickshank’s film which documents the making process for these sculptures as the threads and pieces of wood wind their ways – into creation. For all that it’s surely carefully planned, it looks like great fun. It’s one of two films in the show. The other has been made by Performing Arts students from Coleg Cambria. It’s dynamic and neatly straddling a bored between personal and mechanised – as factories often do. 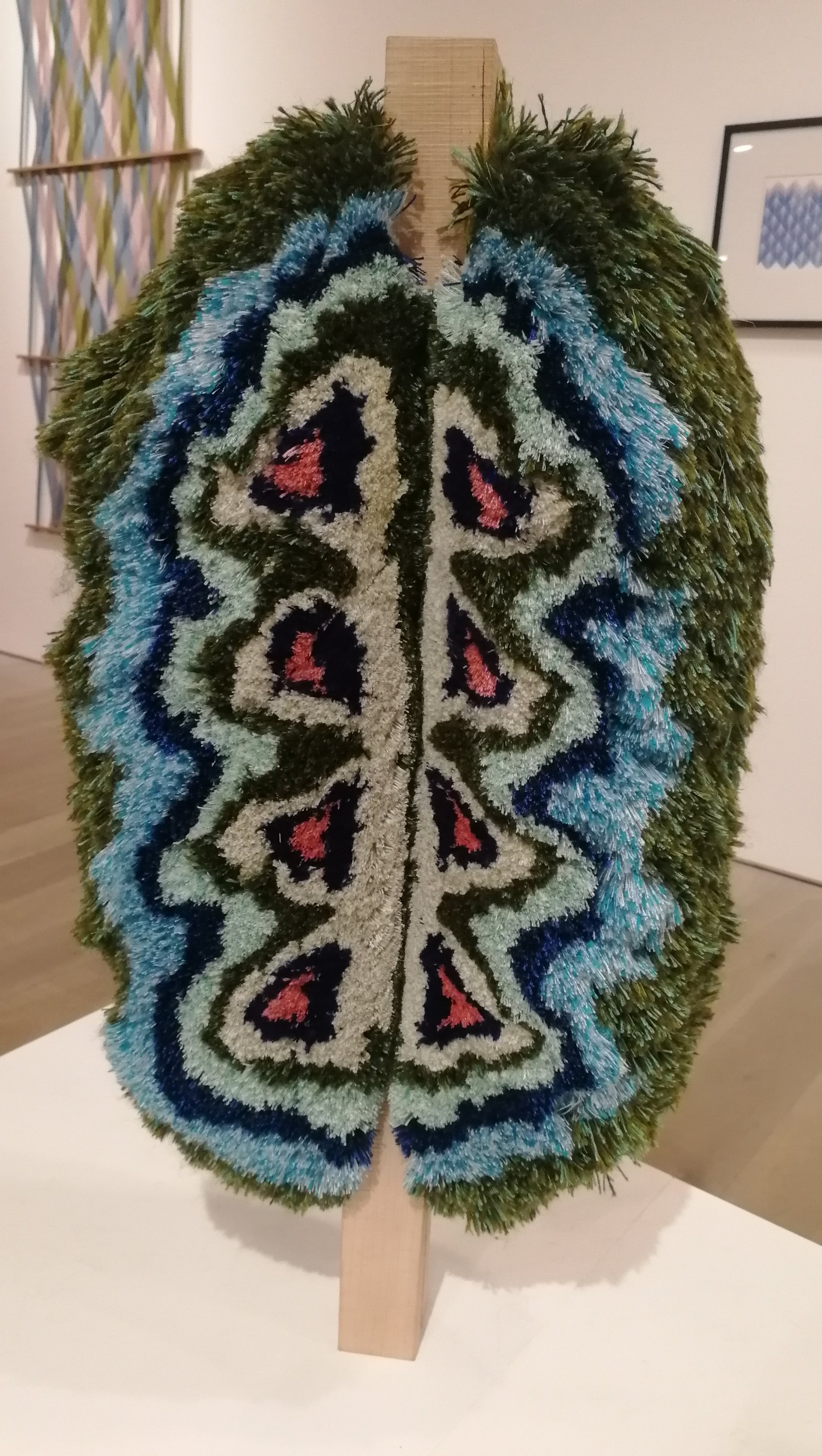 What I got from Uptwist/Downtwist was a sense of actual meaning to a legacy. Recording this kind of history can rely heavily on anecdotal storytelling which, although it matters to those who lived it, is not always effectively conveyed in an exhibition setting. This captures a sense of what it is these threads and fabric can do. They are a physical, almost living presence. Moreover, this exhibition wasn’t about regret: it wasn’t shoved down my throat that it’s a terrible shame that the factory’s gone. It was more like “it was here, and this is the legacy” – it’s then up to us to make what we want of that.

“Fabrication” is a word which takes on a double meaning on the other side of the room. Grayson Perry’s “Julie Cope’s Grand Tour” is two tapestries of a fictitious Essex woman’s life. With multiple scenes and life moments woven into each one, they’re works typical of Perry’s undoubted skill and storytelling. If I have a complaint, I felt that they were almost over-explained. The story behind them in both written across big books surrounding the tapestries, and narrated on the speakers. In addition each piece has an iPad guide to help you understand the references, moments and symbols. One or the other is fine – but both feels distracting. It means you spend less time searching them yourself, more looking for answers in the visuals. I could perhaps recommend the children’s interpretation pack as an alternative approach, which suggests finding out about Julie Cope’s life through a game of I Spy. It’s more nuanced in allowing you to find the narrative yourself. 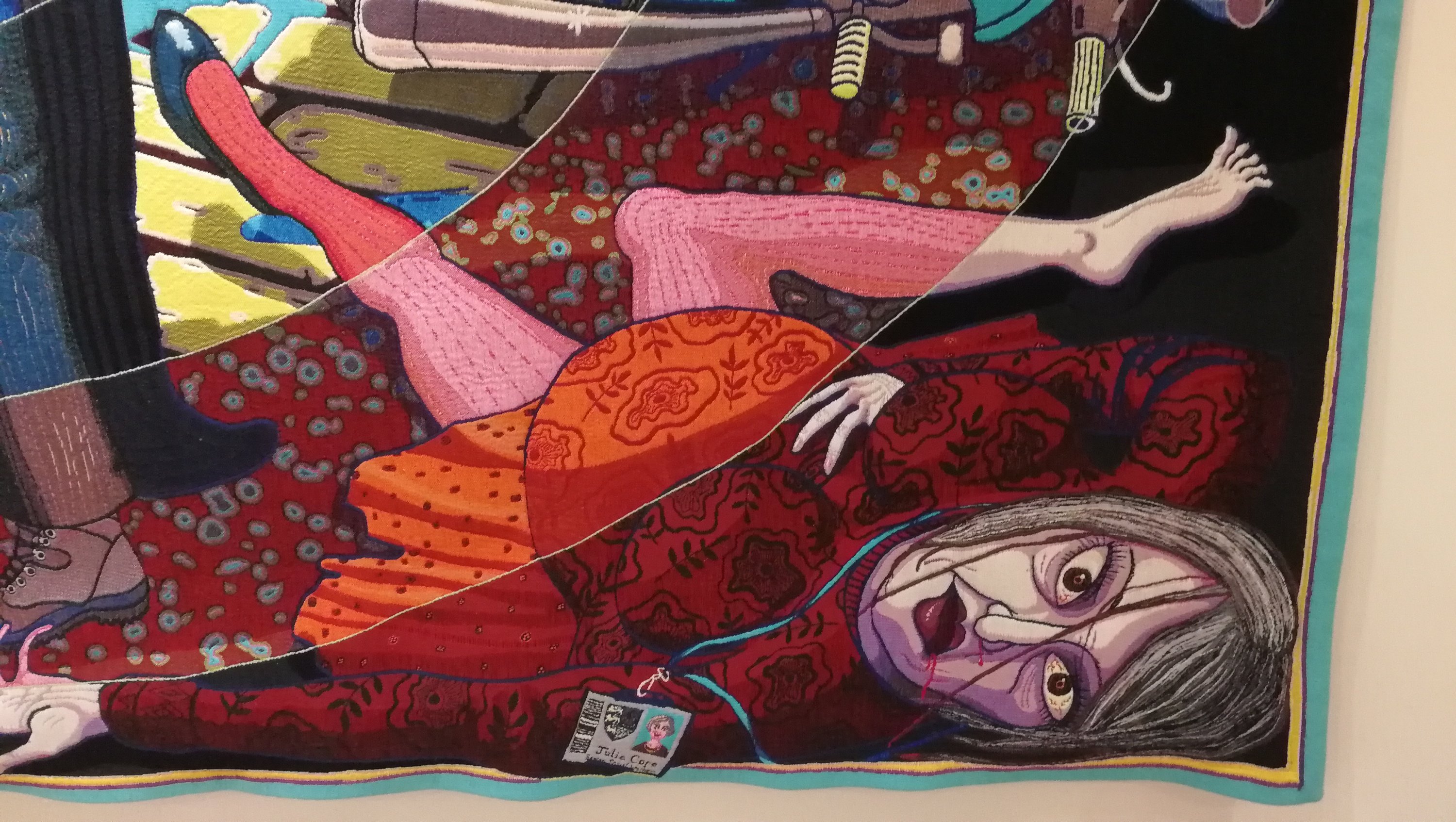 I liked the space, though. I liked the ambition it had. You start off with surprise that it’s in Wrexham, and then quickly realise – why shouldn’t this exist here? This is exactly the scale that every town should demand. These exhibitions may be about older stories, but in their existence here they’re also writing a new one. Tŷ Pawb is also leading the Wales in Venice project, putting Welsh art on the international map this summer. As a base for aiming towards these higher plans, this Wrexham base feels like a great place to start.