I think I was perfectly justified in wanting a lazy day today.  It’s been a busy week, which last night culminated in a completely insane Cabbage gig at EBGB’s.  Having basically only been home to sleep for the last 3 days, the mundane jobs and errands requiring attention had stacked up. Going to Liverpool to see a show was, unusually, an undesirable prospect. 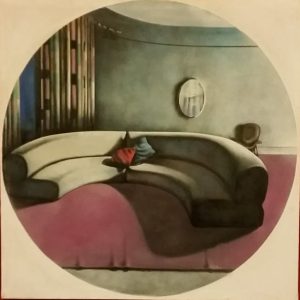 But whilst driving around the Wirral on the aforementioned errands, I decided to drop into Birkenhead’s Williamson Gallery & Museum.  After all, it’s somewhere I’ve never been before.

Now you may be thinking (as indeed I was!):  “How on earth have you, a Wirral-based art enthusiast, never been to your local gallery before?!“.   I think one of the biggest reasons for my failure to visit is my childhood association of provincial galleries with formal, ‘pretty’ landscapes.  I hate these landscapes.  I don’t care how stunning the scenery or brilliant the technical detail; they bore me to death, all merging in my mind into a conglomerated, uninspired mess.  I’m sure that many people would argue against this with me, but the examples they would point to are usually by Masters, unlikely to be found in a local gallery like the Williamson.  And when it’s easier and quicker for me to get to Liverpool than the outskirts of Birkenhead (thanks to the vagaries of our public transport system), it just hasn’t occurred to me to make the effort before today.

So now I’ve been, was I wrong?  Were my fears entirely unjustified? 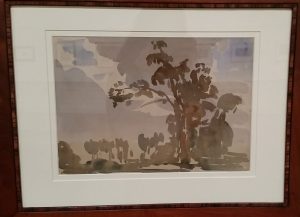 Not (quite) a landscape: Philip Wilson Steer, Haresfoot Park, Hertfordshire, 1917

Not quite – there were, as predicted, a lot of landscapes.  The current exhibition Tinted Steam and Liquid Light showcases watercolours, and watercolour artists do tend to be fond of a landscape.  Whilst there are some ‘Big Name’ artists here such as Turner and Constable, there’s nothing to make me change my mind  on this subject.  Some of the other paintings in the are very nice, though.  Tinted Steam and Liquid Light is trying to make points about the thematic diversity of watercolour, but the main impression I took from the room was how much originality is down to the artist, rather than the medium.

But there was more diversity to be found in the rest of the gallery.  Indeed, to get to the watercolours I had to pass through a temporary exhibition celebrating 40 years of Bugsy Malone, which I’m sure people who have seen the film (unlike me) would find enjoyable.  Then there was the part entitled “A Room of One’s Own”, focusing on portrayals of domestic interiors which created a range of emotional moods.  The “leading questions” phrasing of the introduction made me feel like I was on a school trip, but maybe that’s only because I’ve read so many.  I can imagine that for many visitors, a bit of guidance as to what to look for and consider is actually very useful.

The thing about a local gallery like the Williamson is, it’s not really ‘competing’ with the bigger galleries in the bigger city across the river.  Instead, it makes a place for itself by being valuable to the community.  The building also prominently houses an art supplies stockist and book shop, making it a worthwhile destination for anyone local who makes art.  For everyone else, it’s got to be a place people might think to visit as “something to do” on a cold, slightly wet day like today – it says a lot that on my visit, the most popular room in the building was the cafe. 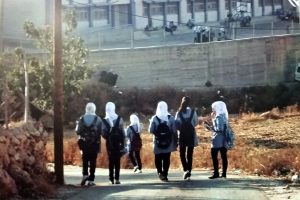 Captioned “Education is freedom. I hope for equality”

And it was here, in the place where I least expected it, that I found the biggest surprise.  Besides doing a strong trade in tea, the cafe is currently hosting Silent Voices, a photographic documentary of life in the Palestinian border town of Bil’in.  Some photos have been taken by Liverpool photographer Elaine Stapleton, but most are by local children.  Whilst Stapleton inevitably (but with commendably little bias) focuses on the political aspects of life there, it’s the children’s photographs which stand out.  They’ve chosen to take photos of the things which matter to them, and it’s not politics.  Its their class at school, their favourite local foods, playing football.  In an age in which stereotypes demonising ‘the other’ seem to be winning wherever you look, it’s a important perspective.

If I’m being honest, most of the Williamson (and the landscapes!) didn’t appeal to my tastes.  That’s fine – not every style of art in the world can.  But the effect that discovering Silent Voices had on me was enough to make me think that I’ll keep an eye on what’s going on there.  And if you live nearby and are looking for “something to do” on a cold damp day, you could do worse.