A couple of weeks ago, I was in the Lady Lever Art Gallery for a friend’s piano recital (which was lovely).  Having the luxury of time that particular afternoon, I went for a wander around the galleries.  And of course, I eventually came to this. 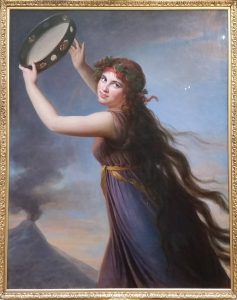 Lady Hamilton as Bacchante, by Elizabeth Vigée-Lebrun, about 1792

This is the painting which the Lady Lever uses on most of it’s marketing materials, and one I’ve always particularly enjoyed.  It has a sense of freedom and personality which the other portraits in the room lack.  To my eyes, it compares favourably with something like this, from the same room: 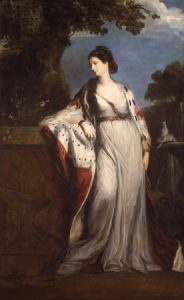 Yawn.  This is woman is showing off her status, as though nothing else about her is important.  With Lady Hamilton, I feel like I know a bit about her, like it’s a statement of who she is.

It’s a portrait I thought well worth writing about, and I thought I had my angle. But as I researched the subject, I began to be a bit troubled by whether my interpretation of the painting was correct.  Lady Emma Hamilton had an extraordinary life, raising herself from blacksmith’s daughter to the widely celebrated and admired lover of Admiral Nelson.  But there is a difference between admiration and respect.  Emma had become famous as a portrait model and mistress, with a reputation for entertaining guests by dancing nude.  Her beauty and “Attitudes” may have made her admired by society, but not respected – this could not be earned in the 18th century with such overt sexuality and her “common” heritage.

So I began to question whether this portrayal of her in an Attitude was less about her freedom, and more about objectification.  Was I seeing the portrait the wrong way, through my 21st-century eyes?  Had it been painted, like most women were in this period, as food for the male gaze?

With further research, however, I have become convinced that my initial feelings were right.  That rather than being viewed as an object of male desire, this pose is exactly how Lady Hamilton wanted to be seen.

First of all, there’s what I’ve learned about Lady Hamilton herself.  She  was a woman who got so far in society explicitly by using her sexuality.  As a popular portrait subject and the object of many men’s affections, she knew exactly how strong her powers in this area were, and doesn’t seem to have been ashamed by it.  They’d got her what she wanted – a life of comfort and fame.

The most important aspect of making me believe in my original interpretation of the painting is the artist.  Elizabeth Vigée-Lebrun is another woman who lived a fascinating life.  Favoured by Marie Antoinette, then forced into exile after the Revolution, she was the darling of pretty much every major European city at some point.  The number of portraits she painted on her travels is staggering, and the male-to-female ratio of her subjects is also notable.  But being a female painter, she can’t possibly be applying a male gaze to her subjects.  And looking through archives such as this, it’s clear that sexualising her subjects isn’t something that Vigée-Lebrun regularly deals in.

Furthermore, it’s also entirely reasonable that Vigée-Lebrun would want to portray Lady Hamilton at a Bacchante, in keeping with the trends of their age.  I studied a whole module at university about “the Myth of Antiquity” in French Art around this time; it really was all the rage.   The myth of the Ancient Graeco-Roman world as the source of all wisdom and culture was all-powerful in ways I don’t have time to go into here.  Vigée-Lebrun incorporated this imagery into several of her portraits of noblewomen, and indeed in more than one painting of Lady Hamilton herself.

Finally, look at this painting by Vigée-Lebrun of Polish aristocrat Pelagie Sapiezyna. 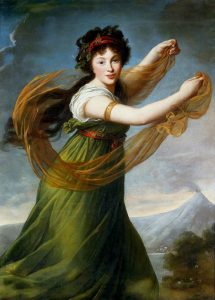 It’s so clearly modelled on the earlier portrait of Lady Hamilton.  Even down to the background: to the best of my knowledge, there aren’t many volcanoes in Poland.  If there was anything unrespectable about the first portrait, I doubt it would have become a model for subsequent works.

Being famed for her sensuality did Emma Hamilton no favours in the end, thanks to the judgmental attitudes of the age.  Despite the fact that Nelson asked for her and their daughter to be provided for on his deathbed, the government refused to pay out, not wanting to be seen to be ‘keeping’ a mistress.  She was further disgraced when the letters between her & Nelson were stolen and published.   But for many years, Lady Hamilton was a woman who was certain of herself, who got where she wanted.  It’s that woman who is worth remembering, and that’s who’s captured in this portrait.