How many different perspectives can there be on one city?

The wonderful thing about people is that however similar your backgrounds, jobs or favourite bands, we all see things in a slightly different way.  This is why art is so often refreshing – every artist has their own individual way of seeing and reflecting the world.  So the truth is, there’s as many ways of seeing a city as there are people who live in it.  And Hong Kong is home to a lot of people.

Victoria Gallery & Museum’s (VG&M’s) LOOK/17 exhibition may be entitled Building the Civic, but that really isn’t a title to be taken literally.  The ‘building’ is done less by the photographers than by you, the audience.  It’s a very different experience to my other experience of LOOK/17’s exhibitions down at the Pier Head.  If I was going to try and explain what links the photographers whose work is on show here, I’d say their work is metaphor. 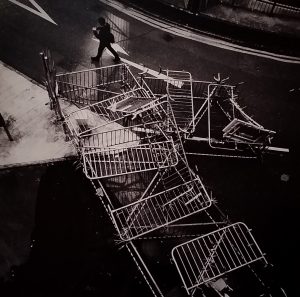 Take South Ho’s series The Umbrella Salad.  The series tells a story about the 2014 Hong Kong democracy protests – but it’s not a documentary.  Even when we see people on the streets, it’s not in moments of angry conflict.  Ho has instead captured the scenes surrounding the main events – tent avenues by day, barriers left fallen in the street.

Metaphor: I felt a mood, an understanding of the protests, without seeing the action.  Good photographers around the world can picture the critical moments of a protest. But these moments surrounding say more about the experience of being part of a movement than what the papers showed.

Moving through the doorway, and to the unusual project of Lau Chi Chung: Lost Family.  His albums are a fusion of his own work, and old photos which have been randomly collected.  There are some obvious formal parallels between the old and the new – but why?

Metaphor: the associations are entirely left to your interpretation.  Some seem to be saying something about the relationships between children, others may be about special places in a life.  It’s so nice that they’re left untitled and unexplained – it’s up to the audience to write their own stories on each page.  I’d love to have the chance to revisit these with a friend, and discuss how people’s different experiences inform their interpretations. 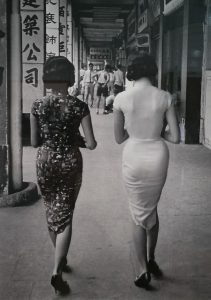 If you’re looking for something more straightforward, then Yan Leung’s images of a changing Hong Kong in Yesterday’s Story are captivating.  These pictures are closest in tone to those around the Pier Head, it’s true.  The rapid development of the province is a story of which we really have little understanding, and was well worth capturing.  Personally, having enjoyed the storytelling of South Ho & Lau Chi Chung, these felt too obvious, and I didn’t feel like they had as much to offer.  But as always, that’s personal opinion, and they’re a good starting point to the subject.

The greatest storytellers are often those who write about something bigger than their character and place.  This is metaphor – the whole point being to make a point easy to understand, more accessible.  I didn’t know much about Hong Kong before, and in factual terms I still don’t.  But by being given blanks to fill with these images and my own experiences, I feel like I understand something more about it.