Life in Motion is about two artists.  One man, one woman, both of whom who were interested in capturing the human body as a site of energetic potential, both of whom died tragically young.  The parallels are obvious, and in terms of subject matter Life in Motion is exceptionally harmonious.  It’s helped by the fact that they were both so damn good at it. 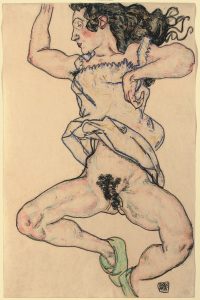 Let me start by coming straight to one of the biggest questions I had both before and had to ask myself during the show: what to make of Egon Schiele? For every opinion that he’s an original feminist rather than a perverted misogynist, it’s not one I’ve necessarily been comfortable subscribing to.  I think to some extent I still hold my reservations.  His portraits of young girls feel like they’re not just about innocence – Nude Girl with Arms Outstretched is particularly uncomfortable.  Even Schiele, after altercations with the police and the public scandal, stepped away from these subjects.

But as for the rest of his work, this is why seeing art in the flesh is so important.  For all that I can read in books that his works are “confident” and “energetic”, it’s when you see them in person that it becomes clear what that actually means.  How his bold, mellifluous lines create a space in which his subjects become agents of motion who appear to be revelling in what their physical selves can achieve.  Nor is Schiele’s interest in the sexual confined to the female body.  His self-portraits are some of the boldest, defiant works in the show: Self-Portrait in Black Cloak, Masturbating perhaps the most shocking even to modern eyes.  Together, his oeuvre is an exploration of a carnality is inevitable in human physicality.  It’s a side of life which was being defiantly rejected by his contemporary Austrian society, and his push against this is groundbreakingly defiant even now.

But Life in Motion is a double-headliner, and even Schiele ends up playing second fiddle to American photographer Francesca Woodman.  Woodman is another artist whose work I have come across briefly, but never had the opportunity to explore in any depth.  What a talent! 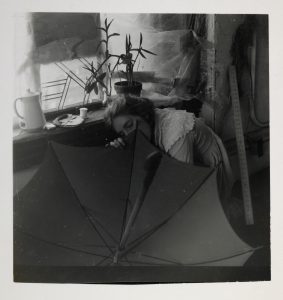 Woodman’s photographs are mostly self-portraits of one kind or another.  Although it’s never stated anywhere, you get the impression that she knows Schiele’s work, identifies with his dynamic subjects.  Her photographs are never settled, her poses always creating a level of intrigue.  If she’s not moving in a long-exposure shot, you feel like she’s about to do something.  Her body is a dynamic tool which she hides, exposes and bends to her will.  She’s unafraid of nudity but it’s rarely sexual – more honest, or practical, and in one particular set of photos where she applies objects to her body, also painful.  It makes the hanging alongside Schiele especially smart.  For while I could see the life in his portraits of women lifting their skirts, and as liberating as the pose may be, in their titillation they’re still haunted by the male gaze.  Woodman’s photographs offer a different view of how a woman can play with bodily conventions when that body is her own, a reality rather than an ‘other’.  No wonder feminism has posthumously claimed her – I was cheering her perspective myself.

Rooms are arranged alternately between artists, which works well for purposes of recognising parallels, but the presentation of Woodman’s work is a little frustrating.  Whilst (as with Schiele) the wall texts tell her story chronologically, her work (unlike Schiele’s) seems to have been arranged more by theme.  This means that when you’re trying to look for her Rome work around where it tells you about her Rome period, you find your selection limited.  This is more to do with the nature of what Woodman left behind in her incredibly short career, which is something Life in Motion is obviously about.  The fact that both Schiele and Woodman died so young (he was 28, she 22) of course leaves the question of “what if..?” hanging over both, of potential cut short.  But it also gives a very specific framing, which could be called ‘capturing the energy of youth’.  With age and growth, what could these two talents have achieved?

Life in Motion is an exhibition which achieved at least two valuable things: introduced me in depth to a fabulous artist, and made me reconsider my opinions on one of the canonical ‘iconic’ artists for the better.  For both Woodman and Schiele the body is a playground and coming into this exhibition, you appreciate the physical self through their eyes.  Forget feeling self-conscious ever again and embrace the power of what the body can stand for.