Another week, another venture into a lesser known area of the art world.  Last time I was at Zap Graffiti was Light Night 2016.  It was a discovery in the proper sense of the word for me: I had previously had no idea that the place existed.  And I’ve always intended to go back. 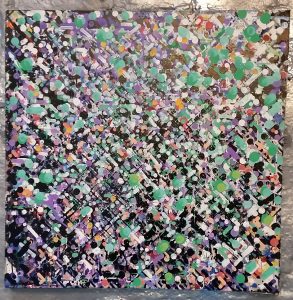 During my childhood in early-90s Tory Bromley, graffiti was most definitely frowned upon, associated with those horrible youths that you read about in the Daily Mail.  Being 7, I had no strong opinion personally.  But as I grew up and started to walk the streets of the wider capital, the potential of graffiti for breathing life into a dull urban landscape became obvious.  Nowadays of course, it’s literally been reclaimed as “street art“, in recognition of this public function.  And from following their Instagram, it’s clear that what the community around Zap create is art.  From that marvellous mural on the Littlewoods building to Kandinsky-style tags, they channel the creative energies attracted to graffiti into (responsibly) making the city a more colourful place.

But whilst I did discover today’s exhibition on Instagram, the works on display in this show are paintings on canvas.  If there is a divide between traditional artistic expression and graffiti, Tymer One stands on it.  Prolifically so – I certainly didn’t expect the sheer number of paintings on show here.  Straight away, they’re aesthetically pleasing.  The style is somewhat repetitive, but they’re extremely attractive artworks. 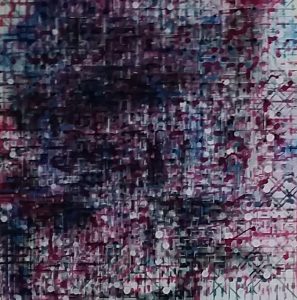 As I look at them, I feel as though they’re each experimenting with balance.  The straight, geometric base of each canvas gives a feel of order and structure.  But the more time I spend staring at the works, the more I’m surprised that this is the dominant effect.  Because each one has so much going on in terms of shapes and colours, it would be easy for them to descend into chaos.  If you want to make a comparison between these and a style of art, it’s with Pointillism.  There’s a similar sense of pleasure in seeing the artworks in a completely different way, from either close up or far away.  But unlike in the works of Seurat, the paintings get less clear, more open to interpretation, the further back you stand.

I don’t mean to be getting metaphorical, but I’m actually pretty sure it’s intended.  Neuro Diversion – isn’t making order out of the chaotic mass of stimuli which hit us in everyday life what we do everyday?   And just as our thoughts and feelings fluctuate, moving in response to the world, so the colours and tones in these works seem to undulate.

As much as I found this quality in the works  rewarding, it did me take time to find it.  I found them aesthetically pleasing from the start, enough so that the repetitive style didn’t become boring.  But it was only with time that I began to feel that they may have a deeper meaning.  In retrospect, I was paying too much attention to the titles – which actually seem to bar little relation to the canvases.  I guess this is where the personal aspect of art comes in – slightly frustrating for the viewer, but not insurmountable.

This is my first taste of art coming from a background in graffiti, and it’s not half bad.  To an observer it’s clear that the conversation between the formal and traditional definition of an ‘artist’ deserves to be stretched beyond Banksy.  That dealing with emotions can be artistically expressed outside of the gallery environment.  Tymer One’s art isn’t going to change the world but it is trying to reflect the human experience with beauty.  And I’m sure even the bluest of anti-graffiti Bromley Tories would approve of that.