Contour: X to X, ROAD Studio, until 28th January (by appointment only), free

Pretty much every show I go to involves some degree of reading via a catalogue, title, maybe historical information.  Reading, in these contexts, has value in how it contributes your understanding of other visuals.

This show is all about words.

They’re good words, these letters between artists Su Jung & Ted Oonk about islands and their associations.  Our status as an island nation seems to be becoming more significant than ever, as Brexit threatens to leave us more isolated than the Channel alone ever could.  Although neither artist is British, nor do they live here.  It’s a key point of Contour, in fact, how little this matters.  Both addressing and signing off as X, it’s often impossible to tell who wrote which letter.  From Korea to Belgium to Liverpool and beyond, we can identify with the images they projects of an island as a bastion, a paradise, or a prison.  They’re making more of a point about how much we have in common as global citizens – “sweet imagination”, as they nicely put it – than the cultural differences which some seek to magnify.

Maybe this is why I feel that an appointment-only exhibition is the wrong format for sharing these letters.  I feel like they could fulfil more of their potential for an audience to discover and respond if they were in a book, or on a Tumblr.  Part of this is that whilst I understand the practical need for some shows to be appointment only, it does hugely narrow the audience they reach.  And Oonk & Jung’s purpose with Contour is interesting.  I’d love to see the conversation extended, see how other people might respond from other cultural perspectives. 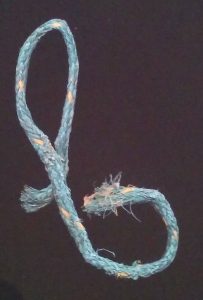 Words: the tie that binds.

Visual art makes sense in an exhibition space, because the experience of the object is vital – seeing it in situ gives you the full understanding of what it is.  Words are much easier to share, carrying the same potential meaning wherever and however they’re experienced. Oonk told me that she & Jung are still writing to each other, that this is not the first iteration of the exhibition and will not be the last.  It’s a conversation which I’d be genuinely interested to see continue, which could branch out in many different directions.  I suppose in that context, publishing carries a threat of bringing the project to an end.  But take it as a sign of quality that Contour makes me wish for more people to have the chance to engage with it.  Art, in visuals and words, is full of ideas to stimulate the world, and their story of places and minds is needed.  And I want people to be able to hear.