New Contemporaries 2018, LJMU Art & Design Building, until 9th September (closed Mondays), freeIt’s a Biennial summer, so it also means that once again it’s time for the touring New Contemporaries 2018 exhibition to pay a visit to Liverpool.  The concept, as ever, is that three established artists have looked around the art schools and chosen the artists they see as the greatest emerging talents.  If Biennial shows some of the big players in contemporary art now, New Contemporaries pitches itself as a look into the future.

It’s a project about individual artistic visions, then – nevertheless, a loose series of themes does seem to be found throughout. In our tumultuous political times, various public figures have been occasionally popping up with the usual criticisms that the younger generations don’t make work that’s “political” enough.  In reality, when everyone’s shouting about politics all the time on the internet, simple flag-waving doesn’t always cut it.   Instead these artists are doing what artists always do and finding different ways to engage with and comment on the state of the modern world.  Take nature, which gets a bit creepy here. There’s a kind of Wicker Man vibe to both Carrie Grainger’s The Forest Has Eyes and Yuko Obe’s Interconnectivity of Life prints.  They evoke a natural world which is definitely judging us for what we do to it.

Elsewhere there’s a sense of..uneasiness, insecurity.  It’s not quite paranoia, but definitely that the ways of the world aren’t quite right.  I’m a sucker for painting, so I loved Madelynn Mae Green’s Petting Smokey, a great piece about empathy and reactionaries that’s both innocent and politically analogous.  Then there’s Sam Henty’s Eborakon Ofriòr Tapestry, which play imaginatively with the form and mythical imaginings of the medieval form.  It takes that imagery and makes it simultaneously more real and relevant, and yet more surreal and unnerving.  For those who want their political statements to be more direct, pieces like Shao-Jie Lin’s Passport to Everywhere provide a criticism of isolationist politics. 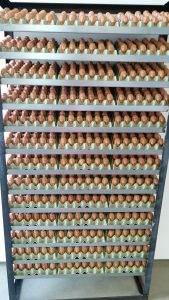 The two works I imagine many people coming out remembering the form of will probably be Viviana Troya’s Hatchery and William Glass’ Two Inches Above the Ground.  Hatchery, a disturbing visualisation of a future/present of conformity and a Handmaid’s Tale-style utilisation of women’s bodies, is a pretty impressive achievement.  Glass’ rooms installation is more familiar, something like a corrupted Yayoi Kusama Infinity Room.  There is a story played on tapes, but it’s short, and there’s a decent paradox between the story and your distraction from it by the pretty lights.  I really hope people don’t just remember Panicattack Duo’s Nothing Really Mattress.  It’s unclear what this is even doing here, really – it certainly doesn’t seem to offer anything new to contemporary art’s messages.

In terms of film art, I really enjoyed Ayo Akingbade’s film Tower XYZ, which in three minutes manages to give a proper humanity and personality, rather than caricature, to its tower block protagonists.  Other than this, though, I can’t honestly recall much about the video art – none of them really captured my attention for the time to get their story across, which is a bit problematic for a genre which demands time.

Even if not much in New Contemporaries 2018 is revolutionary, there’s lots that points to a solid enough future for both the art world and the artists involved.  Keeping engaged in social issues, making a plethora of perspectives heard, all through some interesting forms – as a starting point to watch multiple careers from, I’ll take that.