I was in Prague in April – a beautiful city.  Cheap beer, which I did try to balance out with cultural experiences of an equal or greater value.  There were two reasons that the Mucha Museum didn’t make my list of places to visit, the main one being that I knew this show was coming to Liverpool.  But I also thought that there’s only so much of Mucha’s opulence that I could take in a single year.

My trip to the Walker Gallery’s In Quest of Beauty proved me partly right.  Abstaining in Prague only made this exhibition more rewarding – and surprising.

Mucha’s style is pretty well known – if you’ll pardon the pun, he’s something of a poster boy for Art Nouveau.  It’s a style which instantly brings to mind a certain kind of romantic ideal about late 19th-century Paris, of decadence and beauty.  If it’s this style you’re coming to get a fix of, you won’t be disappointed.

The thing is, I thought this would get repetitive quickly.  I like the Mucha girls, but they’re all basically the same – swirling hair, doe eyes, and a slogan for whatever company was paying for the image.  The sensuality of these women is undeniably alluring, but a little problematic.  If there’s something frustrating about the show, actually, it’s how Mucha’s portrayals of women change from Bernhardt to biscuits.  His early portraits of Sarah Bernhardt are quite literally statue-esque.  In Gismonda  – the image which made Mucha’s name – her height and the vertical lines which draw you up make her unquestionably a powerful figure.  Mucha and Bernhardt were friends, and his admiration for her artistic talent is obvious in these depictions.

So from my modern feminist perspective, it’s a bit of a shame he goes on to practically define how “sex sells”.  In the way they all stare into the middle distance, their heads adorned in one way or another, women clearly become just a stylistic device.

But here’ the thing: even knowing this, I just can’t get enough of these.  The sumptuousness of Mucha’s style just leaves me wanting more. I fall for the emotional impact of the flowers, the swirls, and the colours.  I fall for the level of intricate detail in every aspect of the pictures, from the faces to the backgrounds to the typefaces – it really is quite remarkable.  Mucha delighted in the idea of creating images that people would want, which could turn the streets into “an open-air art exhibition”.  With these levels of decadence, his posters tick that box. 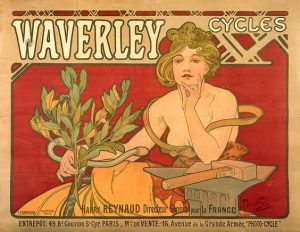 So if you are coming to get your fix of beauty, you’ll definitely find it here.  But there’s also so much more to discover.

The exhibition goes some way to giving a contemporary context to Mucha’s style.  His posters may be some of the most definitive images of Art Nouveau, but he was far from the only practitioner of the style.  Mucha was friends with the sculptor Rodin, and the mutual influence is plain to see here.  The female figures in the sculptures featured here are of the same lithe women whose hair and bodies are in the same graceful, flowing style.  The Walker have also, as usual, made links to the contemporary British art scene.  There’s a poster from the Liverpool Academy of Arts which is particularly striking – a gorgeous work of art whose lines are clearly Mucha-inspired.

But the most surprising – that is to say, unknown – aspect to me was his Czech nationalism.  It’s difficult to associate Mucha with anywhere other than Paris.  But Mucha was from Moravia, a region of the Czech Republic which at the time was under control of the Austro-Hungarian Empire.  At the end of this show, there is a selection of works from after 1910, when Mucha returned home to directly support the nationalism cause for independence.

It’s a fascinating new application of his style.  Take the two studies for the decoration of The Municipal House, Prague.  Prague Subjugated still features rich golden tones, arabesque shapes, and a young woman.  But she’s not a typical Mucha woman – her eyes are covered, hair plaited.  I’m not usually one for allegory, but knowing how different this is to his usual style does make it more effective.   That’s before you even get to the Song of Bohemia.  Romantic, nationalist and Mucha-esque, it’s a painting which packs a rousing punch.  It makes me wish I had visited The Slav Epic on my Prague trip (although it’s an excellent excuse to go back).

The most important impression I gained from In Quest of Beauty is that Mucha was clearly a genius at what he did, and the reasons he has remained so important are here for all to see.  But I feel like The Walker have put together a show which brings the pictures into a real-world context far more than “aren’t they pretty?”.  I learned new things here – about his nationalism yes, but also about his commitment to a democratic style of art.  It succeeds at showing how Mucha fulfilled his aim of making “art for people” in many different ways.  Make sure that “people” includes you too.

1 thought on ““To love beauty and harmony””