Hassnat Sikander, OUTPUT Gallery, until 1st July, free*Klaxon* There’s a new gallery space in Liverpool! OUTPUT opened on Seel Street about a month ago, right next to Kazimier Garden (it’s supported by the Kazimier team, in fact).  This is the first time I’ve been able to visit since it opened last month, and there’s a lot to like about it.  OUTPUT’s focus is on Liverpool born and based artists who they, pretty reasonably, have noticed don’t have access to enough other spaces in the city for showing work.  They also keep the visitor experience local with a nice little cafe serving food from local businesses (I will be back for a cake).

But what struck me as the absolute nicest thing about OUTPUT is their accessibility.  Everything here struck me as designed to make visitors feel they can belong in and be part of this space just as much as anyone. Most relevantly for this show, it’s lived in the exhibition notes.  People who write the notes for shows are sometimes too wedded to big words which confuse ideas rather than clarify them.  These feel inspired in comparison.  A brief introduction to the show, then 4 questions to provide ways of thinking about the exhibition, with the artists own answers overleaf.  Please can other spaces take note: this is how to help people think about contemporary art without being patronising.

What about the art, then?

Hassnat Sikander’s subject matter is the psychological impacts of forced marriage and cultural enforcement, and you definitely get a sense of exactly what she thinks of these things.  It’s not as straightforward as simple anger, but a lot darker and more uneasy than that.  The emotions which come through from this work are deeply affecting, the personalities on show quite haunted.  ‘Haunted’ in the sense of how a ghost is something, without being completely something.  A figure unable to fulfil its full potential.  And it’s this sense of losing a sense of self to something else that Sikander’s work conveys excellently.

Her methods are physical, and the one which takes up the most space is a broken shed.  This comes from a shocking story which she outlines in her answers to the questions, which explain why the shed has particular personal resonance for Sikander.  It’s also a piece in transition – she will be putting this shed back together over the course of the show.  I saw it with the pieces lying scattered across the floor, and it already screams out about psychological trauma in the shards as it is, and watching its transition over the course of the next week or so should be fascinating. 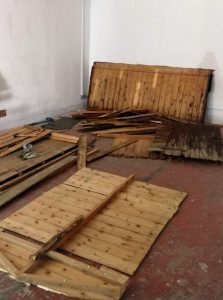 Her other work is in sound and vision, particularly dance.  I’m certainly no dance aficionado (I did go and see The Nutcracker in about 2007), but I am nevertheless mesmerised – it’s at times beautiful, at others fraught, always personal.   There’s two parts: the first is two figures performing alongside each other to express a range of different emotions.  The second is a body moving, and being reflected, to create patterns akin to those you see in kaleidoscopes, or perhaps mandalas.  Like the exhibition’s musical soundtrack, a selection of sounds which seem to half-recall moments from a particular time or place, they seem to point to another culture without being specific.  Perhaps Sikander is making her experiences relatable to a wider group of women, it also feels like an expression of perhaps not knowing exactly where and how she herself fits culturally.

This is work with power that would deserve a show in any city, and which shows the value of having a gallery with its ear close to the ground of the local scene.  I’ll be watching the steps forward both artist and gallery take with interest.