A kaleidoscope is a children’s toy, which moves colours and shapes around is a great tool for sensory development and awareness.  We tend not to play with them as adults, who think we understand our senses.  But now the Walker’s latest show in collaboration with the Arts Council Collection is here to bring those ideas back.

Artists in 1960s Britain liked playing around with the themes of the toy: colour, shape, movement.  Each room of Kaleidoscope is full of work with a “wow” factor, using colours and shapes which demand your attention.  This could be a confusing assault on the senses, but it’s all presented pretty cleanly with lots of space between the pieces.  Each work has its own space to show off.

It’s certainly a lot of fun.  In a way, this alone makes the show a success – I can’t imagine many visitors leaving here with no opinion on what they’ve seen.  But the British art of the 1960s wasn’t just about having fun.  They were continuing the 20th century project of challenging  how to present art and what it is we actually see and judge in works of art.  To say that it’s about surface would be right in some ways, but also much too simplistic.

When I say the work is ‘presented’ in a different way, this is still an exhibition of painting and sculpture.  But each piece has its own specific intentions, and they’re not usually pictorial.  Tess Jaray’s St Stephen’s Way may be of something specific – but that thing isn’t the first thing you notice.  Instead you’re first attracted to the colours, how the black sets off that green.  Then how the abstracted shapes are present in their space – and only then might you notice they come together as a building.   Ultimately, it might be dealing with a Big Theme – religion, science, environment.  But what you actually see, and how you see it, comes first, which makes it all the more satisfying.

The role of colours drawing attention to the shapes is typical amongst these paintings.  The paint, and painting, and what that does to the eye beyond simply showing us a picture of something comes to the fore.  Take Painting 96  by Bernard Cohen, which makes me think of a contrast with the Lichtenstein’s across town at the Tate.  Both are very interested in the surface of what we see but whilst Lichtenstein aims to perfect the details, Cohen uses deliberate messiness to make us ultra-aware that it is a painting we are looking at.  And of course, there’s a Bridget Riley.  You’ll probably know Bridget Riley, she’s known for her paintings which confuse the eye and somehow look like they’re moving.  Cataract 3 is no exception, but also take time to study the skill that’s gone into making the effect come to life. 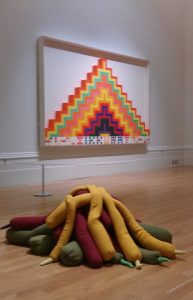 Some of the most eye-catching pieces here are the sculptures, which tend to absolutely dominate the spaces where they’re set in a way that other statues – say, of people – don’t.  You can’t help but take notice of them and most importantly, want to explore their entirety.  I was both delighted and frustrated by the annoying not-quite-matchingness of William Turnbull’s Double Red , enjoyed exploring how David Annesley’s Blue Ring framed its surroundings in changing ways.  There are also pieces which people might say “not art” about, Barry Flanagan’s Heap 4 being a particular candidate.  Personally I like the way it disrupts the space and plays against the work around it, although those are certainly aspects which work much better in a gallery setting than they would out in the world.

I think what Kaleidoscope is about and what makes it such a satisfying show can be explained with reference to a painting which comes near the end: Joe Tilson’s Zikkurat 7.  A Zikkurat (or ziggurat) is a type of tiered pyramid.  You could choose to see Tilson’s bright, almost abstract rendering of a traditionally sacred structure as a kind of defilement, a debasing of the representative tradition.  Or you could see it as a creating a new kind of monument: one where colour and form are central to the philosophy.  Kaleidoscope is an exhibition about how artists of the 1960s built and used this philosophy to make you to pay attention to the object, and they’re objects which will almost certainly make you smile.