London: a city I’m always glad not to live in, but in which being a tourist is rarely dull. Visiting as an adult, I discover something new about it each time. Camden’s been ruined, while Shoreditch is better than I expected. On this visit, when the shows I had earmarked to visit were in Mayfair and Fitzrovia, it was the discovery that these areas are marked as the poshest bits of the Monopoly board for a reason. But they also happened to be the stages for two very good exhibitions. 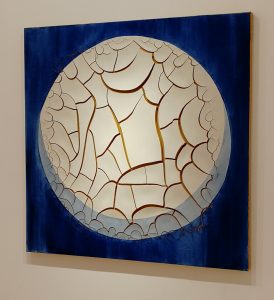 Surface Work was a show I’d been keen to see: an exploration of abstract painting produced by female artists. It was originally spread across both Victoria Miro venues, but the Wharf Road element closed last month so Mayfair it was. Not that I could say I felt hard done by – this is a great show. It’s got a selection of diverse abstract pieces covering a century of production, from Liubov Popova to a 2018 cracking (and cracked) Azulejão (Moon) by Adriana Varejão. The question almost inevitably comes to mind: what difference does it makes that this is work made by women? The answer is none – and yet, all. In terms of their connection, ‘women’ and ‘abstract’ is pretty much is – and ‘abstract’ is a pretty broad term, encompassing everything from the free brushstrokes of Helen Frankenthaler to the muted, linear order of Hedda Sterne. But it’s nice to be reminded that despite the impression traditionally projected by the art world, women have been making work just as vital, fresh, experimental and vibrant as men all along.

But oh, Victoria Miro. Maybe it’s not its fault – maybe it’s Mayfair which means it attracts the sort of visitors who can be heard telling their companions that their favourite thing about the gallery is its “exclusivity”. An attitude which frustrates me enormously, for surely in an art world in which women artists are still underrepresented, a show like this should be wanting to encourage an audience. But the venue isn’t exactly trying to counter this impression of exclusiveness or even slight intimidation – whilst there may be very good reasons for keeping the doors locked (more than a little confusing for a first-time visitor), why hang parts of the exhibition in the office?! I am sometimes frustrated by the inaccessibility of appointment-only venues in Liverpool but at least I understand it: the shows are invigilated by artists who also have other things going on, often involving needing to be paid. Victoria Miro, clearly well-staffed, well-funded and well-publicised, has no such reason for creating something of an elite, inaccessible atmosphere. 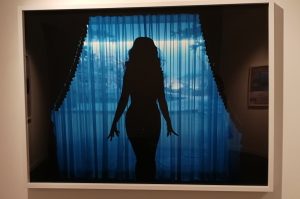 There’s a similar door situation to get into TJ Boulting for What to do with a Million Years: are Mayfair and Fitzrovia secretly at the heart of London’s ‘crime epidemic’? It would have been a real shame if I had walked past this show though, as it’s absolutely terrific. It’s set around a story which would intrigue even the most casual interest: a rich man’s underground bunker house. Yes that’s right: in the 1960s, Avon’s founder Jerry Henderson was so concerned by the threat of nuclear disaster that he moved his home 26 feet underground. Juno Calypso’s photos are all staged there, and as a setting it’s everything you could hope for: a time-capsule of pink cupboard doors and artificial sunlight.

It’s a location which also seems the ideal fit for a particular type of photographic subject, something a bit Stepford Wives. Calypso does deliver this aesthetic – but extremely well, with work tinged with something more. Her mission is helped by the later history of the bunker – its current owners being a group interested in the possibilities of cryogenics and eternal life. So, as the title suggests, Calypso’s photographs are staged imaginings of what that life, in this place, might look like. More than look like, perhaps feel like. Her images are a powerful mix of the erotic, sensual, sinister – and yet, somehow, infused with a sense of meaningless futility. Who wants to live forever anyway?