A Small View, until 14th May, free.  Open Saturdays 1-5 or by appointment

I confess, I’m a bit late getting these words out to you.  I feel bad about this, but I’ve been busy and time for writing has been basically non-existent.

I’m cutting it particularly fine with Constellations, which closes this weekend.  Meanwhile, A Small View is only usually open on Saturdays.  So at the time of writing, you’ve only got 4 possible Saturdays to see this.  And if you’re anything like me, Saturdays get filled up pretty quickly.  But if you are doing the rounds of LOOK/17 this weekend, don’t discount the fringe venues.  They may not be on the official handout (and why they’re not, despite being part of the festival, does confuse me), but they were

Every venue for LOOK/17 has brought together the work of several different photographers, and it’s felt pretty coherent – I’ve understood that they have something in common which has led to the decision to put them together.  At Constellations there’s more going on than at the main venues, but it feels less coherent.  There’s no particular thread joining the pictures together. 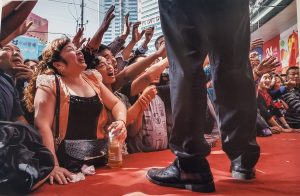 Let me explain: the title of the festival is “Cities of Exchange”.  From what I’ve seen so far this has meant an exchange of viewpoints and of experiences, drawing parallels between what we recognise in Liverpool and what we can see in the views of Hong Kong.  At Constellations the photos are still of cities and their people, but I didn’t get a feeling of them coming together to tell me a story.

There are some nice pieces of photography here, though I am frustrated by a feeling that in trying to fit so many photographers’ work into the space, they’ve curtailed what the show could have been.  I like Chris Lee’s candid pictures of ordinary people in the city: there’s one of two policemen (which I couldn’t get a decent shot of my own of) which is particularly striking.  And I was intrigued by Tristan Poyser’s image for Automation – although the accompanying Ipod sadly wasn’t working on my visit, which made me feel like I’ve missed something.

But I can’t personally see how these fit alongside a series such as Shira Gutgold’s Spaces for Living.  My suspicion is that as Constellations is a venue with a naturally higher footfall (being a bar), the idea was to give an audience a taste of what else is in the festival.  I just wish it was better at telling that particular story.

Diversity of approach also reigns at A Small View, with each of the 3 photographs having an extremely unique approach.  But this uniqueness, the fact that each of these artists is doing completely their own thing and it’s nothing like what I’ve seen elsewhere around the festival, makes it a more interesting show. 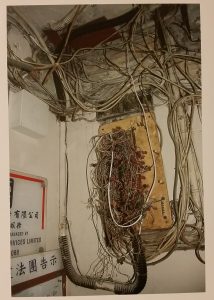 I say “nothing like” – I’ve seen several documentaries such as Alec Aarons has made of Shanghai, good as his photographs are.  But no comment on “exchange” has been as obvious as Bertha Wang’s Trace of British Colonial Hong Kong.  She’s literally found objects in Hong Kong which have a direct correlation to everyday sights in the UK, and spliced the pictures together.  When I call it obvious, it’s not an insult.  It’s a very direct way of bringing the viewer think of issues of colonialism and its legacy.  This is something which Hong Kong is still struggling to figure out and which, writing this and reappraising the pictures, I find myself asking many questions about the history and morality of.  Obvious can be not only attractive, but effective.

But I think that the most fascinating pieces are by Adrian Davies.  Davies has sought out the wires, pipes and cables which support the city, giving it energy for warmth, food and light.  Did he look far and wide to find those which look so particularly organic, resembling nature as much as they do?  I suspect not – I suspect these could be found in any major city.  We’re just unaware, taking these life support systems for granted.  Trying to Google Davies, it’s not really surprising that he’s previously specialised in wildlife photography, and it gives his eye on the urban jungle a unique perspective.  These pictures are, for me, a star attraction in the festival as a whole, and well worth seeking out.  LOOK/17 might be keeping you busy already, but spare some time to stop here and see why the Fringe shouldn’t be forgotten.