The Wonder of it All, The Gallery Liverpool (Stanhope Street L8 5RE), until Thursday 6th October, free, 1-5pm

Another visit to a new (to me) art space this time.  Despite it’s name, I bet you don’t even know where The Gallery is – I didn’t.  Turns out it’s “on my way home from work”, and on Friday  evening I was in the mood for some artistic rejuvenation.  So I made the very good decision to stop by.

The Wonder of it All brings together work by two local artists, Josie Jenkins and Jacqui Chapman.  Although their works initially appear very different, they are united by an interest in the ways that us humans manipulate the world around us.  Not just alter, but consciously or otherwise, are destroying as we go.

Most of us are aware that a basic fact of the 21st century is that there is too much stuff.   The show title is well-chosen – the wastefulness of our society is staggering when you start to get into numbers.  Yet maybe because it’s too huge to easily comprehend, we carry on as though it’s not an issue.  Jenkins and Chapman aren’t offering any solutions to this dilemma, but their work does bring it to the forefront of your thinking.

Each artist’s work addresses the issue in a slightly different way and so, only because hers is the first work you encounter in the show, I’ll start with Jenkins.  Many of her works are inspired by an artistic residency in China, the country which is the world leader in mind-bogglingly huge use of resources.  It’s both the world’s factory and its dump, the final destination for much of our recycling.  Jenkins’ works are fascinated by the impact this out-and-back trade has on the landscape. Many of her works create a contrast between the natural and industrial.  It’s not as simplistic as it sounds, and she can make a shipping container look as much part of the landscape as a tree.  But there’ a constant question of what has been lost to make space for them.

I like her style, and I particularly enjoyed No Pattern Breaker (left).  The painting is accompanied by text exploring the psychology of recycling.  The fact that when we know we can recycle something, we actually use more –  it alleviates the guilt about consumption we may otherwise have had.  The results of this behaviour are here, quite literally changing the landscape.  Sometimes, we need the obvious to get the message.

Meanwhile Chapman’s focus is on botanical waste, in particular the flower show.  If that sounds inconsequential to you, think about what it actually means.  The whole point of a flower show is to be an exhibition of man’s power over nature, of how the natural world can be bent to fit the human will.  Even though gardening is often described by its devotees as an antidote to the pace of modern life, Chapman explores how the desire for instant gratification is creeping in even here.  So her paintings are certainly attractive, but they’re painted with straight-out-the-tube colours, onto easily disposable paper.  Don’t like a Night Garden?  Have the artificially-lit version next door – starker, less mysterious.

Then there’s the whole back wall, which is covered in paintings of a type of orchid. With their details magnified and in lurid colours, the cumulative effect is somewhat overwhelming.  That’s not a word historically used to describe orchids, those once rare and expensive plants.  But nowadays they’re cheaply available in any supermarket.  The more you consider it, the more perverse the multitude seems. 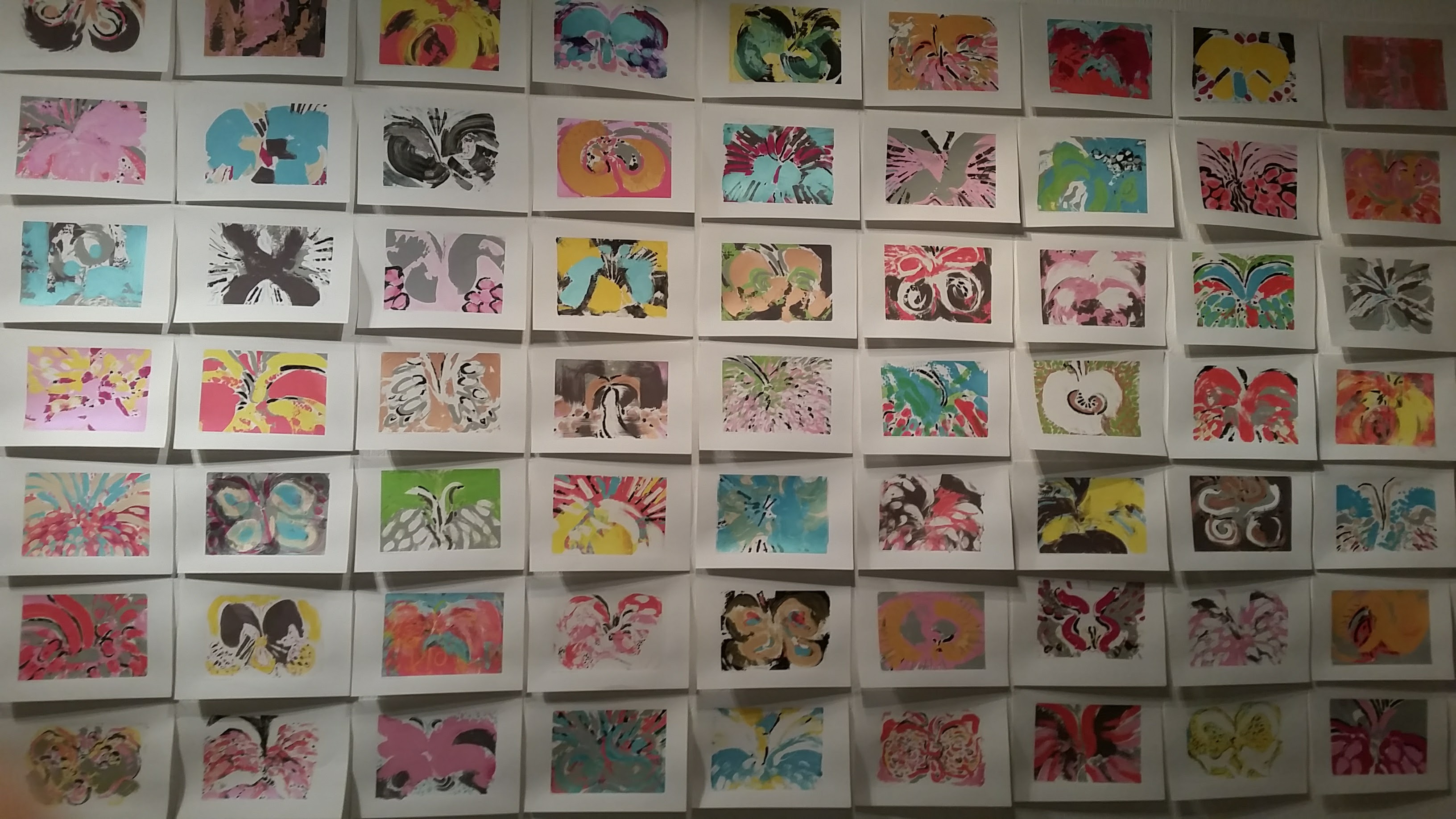 I hold my hands up to admit that although I do care about the environment and sustainability issues, I still fall for “New!  Here!  Now!“.   This show doesn’t scorn you for this, but social consciousness in art is a good thing, and has made me personally reconsider my own recent impact on the world.  Plus, it’s pretty lovely art all round.