I’ve had a weird year.

Here’s an exhibition about it. 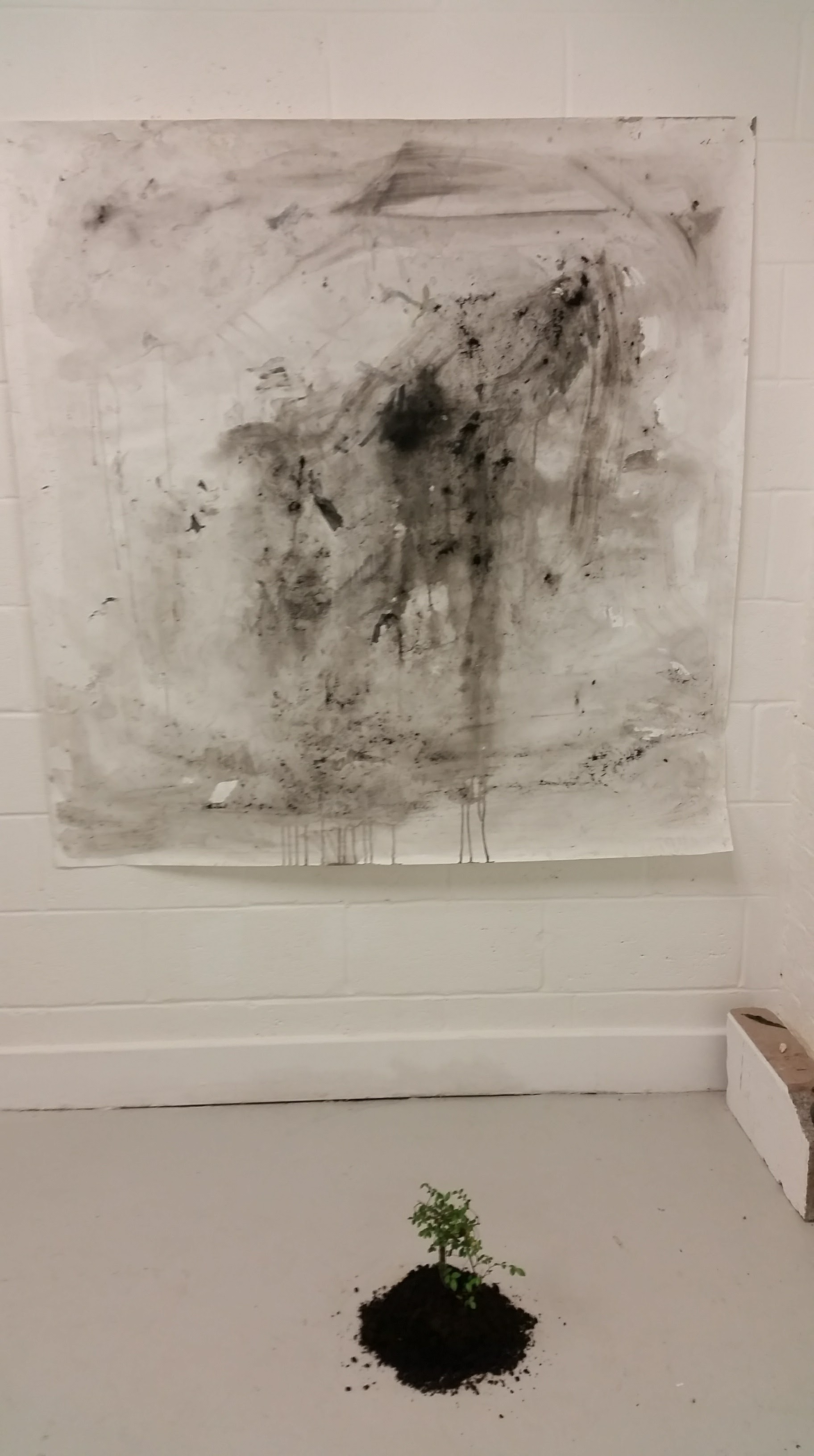 So reads the blurb for Michael Lacey’s show at A Small View.  The dominating mood of this year, in fact, seems to be that it’s a “weird” one.  Lots of Big World Events have shaken us up, left us feeling uncertain of facts and values we have taken for granted.

In this show however, I didn’t think that Lacey was thinking about Big World Events – not specifically, at least.  This exhibition feels more personal than that – not about the year, but about his year.  Let’s think for a minute about what a year really is.  We don’t look back on a year as a period of time, but as a series of events.  A disjointed series of usually only loosely connected events which, through the circumstance of when they happen, become forever linked in the memory.

The thing that hits as soon as I enter the gallery is that this is a very diverse show.  You can’t define Lacey’s work as being of one single style, it’s a mix of lots of different elements.  This is not a criticism – they work together.  After all, Lacey’s not telling a linear story here, because who’s year is really like that?  We’re instead given glimpses of the feelings and thoughts he has chosen to express at different times, in whatever way felt fitting.  As an artist does.

The diversity is also a deliberate decision by curator 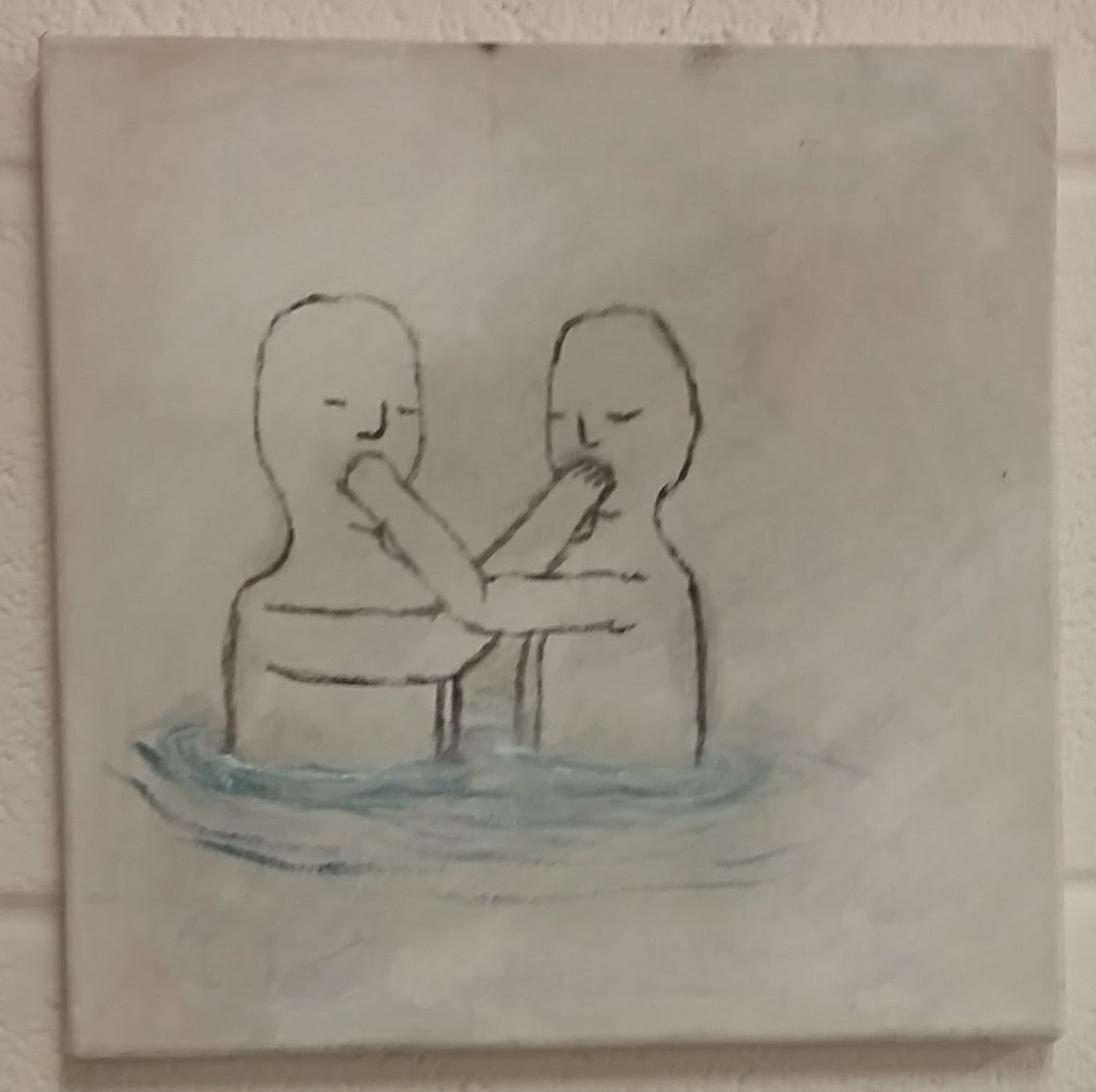 Gabrielle De La Puente, who is clearly very familiar with Lacey’s practice.  Lacey started out as a collage artist but has branched out from this in various ways in recent artworks, which de la Puente has wanted to highlight.  I think it works in terms of giving you the full picture of who the artist is.  I also like the deliberately unusual placing of some artworks.  It adds to the overall impression of having an idea – some kind of plan – but the kind of plan which might be waylaid down any kind of mysterious road.  (Dare I say it: down a hole, or up a mountain?  I know I’ve had years which feel like I’ve explored both…)

Lacey’s own description of these works being about a year might sound personal, but they’re not individualistic.  From all of the works covering most surfaces of A Small View, there’s perhaps only two or three which I would hazard to guess were about specific emotions.  The obviousness of those is actually slightly jarring when they sit alongside pieces which are much more open to feelings, questions and interpretation.  None of the works are titled, and I found not having to look for meaning in the little card next to the actual artwork very refreshing.  Here, each artwork is what it is. 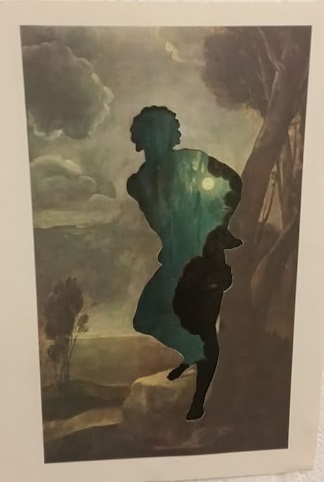 All of this, and I haven’t even got to the question of whether the pieces are any good.  The short answer is, yes.  Whatever the style, on the whole they keep you looking, thinking about them.  I particularly like the pieces that include figures (e.g. above).  They seem to be involved in intimate yet unfamiliar practices, capturing something inexpressible.  I also appreciate Lacey’s use of Classically-inspired collage figures.  It creates a similar effect to that described above: familiar, but slightly apart from our world, a little mysterious.

Writing this, it’s become even more impossible that it was even when I saw it to define what this show is about.  It’s not really a ‘story’ of a year – these are good pieces which will appeal to your own personal sense of meaning.  Nor is it simple showcasing Lacey’s work – it’s put together too fluidly for that.  I found the combination of styles, techniques and moods here immensely satisfying, striking a chord with something I could identify with.  If you go and explore the show, I’m sure you will too.