“Have nothing in your house that you do not know to be useful, or know to be beautiful“.  The words of William Morris that are usually found near the top of any list of art & design quotes.  It’s an ubiquitous and cheesy line, but one which also contains a grain of truth that we  seemingly can’t help wanting to surround ourselves with beautiful things.  Taking ownership of ever more beautiful things is one of the main pillars of the capitalist system.  Surely, then, it’s also true that we want the spaces in which we keep our beautiful things to be beautiful things of their own.  This is where architecture comes in.

RIBA North only opened in June, and Ceramica is the first show I’ve visited there.  I didn’t know exactly what to expect: was it going to be a technical display by and for field professionals?  That would have left me very out of my depth.  But Ceramica is structured in the same way as many art shows – because of course, architecture is an art form.  It’s a science too, but when I’ve heard architects talk about their plans they seem to focus on inspiring feelings and emotions in exactly the same way as many artists.  So if you gave artists and architects the same challenge to design something beautiful and functional, who would do best?

All in clay: the material is vital here.  As a (slightly grating) voiceover constantly reminds you, clay is one of the most sustainable and pliable materials in the world.  Ceramica explores how it can be more than just functional, that it can also be used to introduce beauty to our built environments.

The first part of the show, “Engineer Interpret”, is the domain of the architects.  You can tell this as soon as you walk in and your attention is captured by the great panel of funnelled ceiling lights.  In the home of RIBA, I would be disappointed if the design wasn’t this eye-catching.  But these lights are more than just pretty.  They’re designed to distribute daylight most efficiently through a room, thus minimising the need for fossil fuel-burning artificial light. 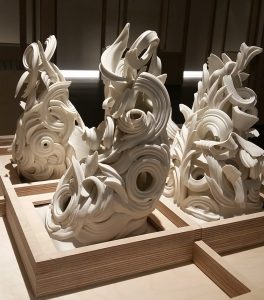 A simple cone thus proves to be practical, attractive and environmentally friendly.  What else can be achieved with such a simple concept?  The rest of the first space is taken up by exploring the design of the shape.  And some of the results are really rather beautiful.  If pieces like Jo Taylor’s Corona Cones were genuinely put into buildings, it would make for a more interesting environment to be part of.  You sometimes get the impression that as an art, architecture can often be stymied by convention.  So it’s great here to see such a diversity of interpretations.  Apart from all being roughly the same shape, every piece of work is completely different in terms of design and pattern.  It could have been repetitive, but it’s actually fascinating to see these inventive variations on a theme.

The second part of the show is “Interpret Engineer”, with the artists allowed to take the lead themselves. Given a brief to design a screen wall that properly functions, each ceramicist has come up with a strikingly different design.  Each is beautiful in its own way, each would be a talking point in any space it was featured in.  Just like the cones, these screens left me wondering why so many buildings seem to be so boring, when they could apply such creativity of vision.

If I’ve framed this as a competition between artist and engineer, I’m not sure it was.  Rather, Ceramica is about the potential of what can happen when artistry and architecture intersect.  It feels like a concept show, where you really hope the concepts become realities.  How the urban environments in which most of us spend our time could be filled with inspiration without having to look to the past.

2 thoughts on “The shape of our world”