The worlds of art and celebrity have long had a troubled relationship.  Art is “meant” to be about “something higher”; historically, it’s been hard for some people to accept when artists look straight ahead instead of up.  Debates about whether figures such as Andy Warhol’s meditations on Marilyn Monroe really count as ‘art’ have long been part of the general public conversation around expectations, predicated on old ideas of good and bad, worthy and shallow.* 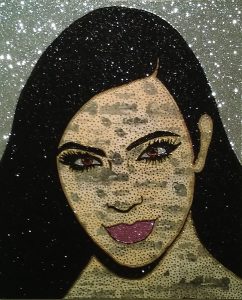 And of course, much of what gets called ‘celebrity culture’ is shallow.  But that doesn’t stop any of us from falling for its allure.  I doubt that even amongst the sniffiest of commentators there’s one person who hasn’t, in some way or another, bought into its shiny look at something beyond the ordinary.  Who hasn’t caught up with Drag Race or Real Housewives (or whatever’s your poison) after a day of working to remember that something more fabulous than the 9-5 is possible?   In this context, pop culture is a bit like chocolate: good for you as a treat in a balanced diet.

But one cannot live by sweet things alone.  Spend too much time yearning for their world and you can lose yourself; your self-esteem, sense of individuality, or sense of place in the wider world.  And it’s this territory that Ben Youdan explores in Glamour.  I’d seen photos of the launch on Facebook: glitter.  Lots of it.  And I’m a sucker for glitter. But while I was hoping for more than just surface, I wasn’t quite prepared for the punch Youdan pulls in this show.

Because behind the shiny first impressions are concealed dark conversations, a comment on what the shallow pool of celebrity protects us from.  How we live in a society that appears to care more about Kim Kardashian than the bodies of children being washed up on beaches (“Newsfeed”).  If this all sounds a bit sober, that’s not what Youdan’s doing.  He’s not chastising these pop culture icons for what they are, nor us for liking them.  These are more like a quite literal reminder to keep an eye on the bigger picture, too.  Sometimes, you need to look closely to find out what’s really going on – and in many cases, be shocked by what you find. 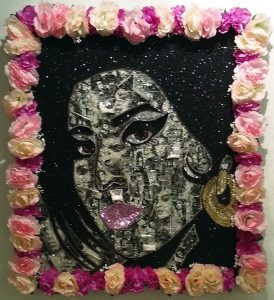 “The Cult of Celebrity”

Example: Glamour is in association with Homotopia, and one of the more heartbreaking comments on how surface can mask the deadly truths of the way we sometimes treat our fellow human beings is “I want to be a spoilt, rich white girl”.  The fate of Venus Extravaganzaˆ is a gay rights issue, but can also resonate with anyone who uses surface glamour to hide the day-to-day reality of rejection or cruelty.

The reason it’s not preachy is because this construction puts faith in the audience to be smart enough to look for themselves, maybe even know beforehand what they’re going to find.  Juxtaposing the shiny and the terrible may not be new, but Youdan does it expertly.  Careful thought has clearly gone into the pairing of celebrity and subject matter.  And titles, which are often dry references to the struggles the sparkles are distracting you from.

Glamour is a show which pleases on every level.  It brings the bitter with the sweet without judgement, in a manner which is fun and approachable.  If they were anywhere near my skint-blogger budget I’d be tempted to buy one of these and hang it above my TV.  To provide a dose of grounding in the most fabulous way possible.

* Further reading, if you’re interested:  I recently re-read this seminal 1939 essay and it still reads as hugely influential on the way people perceive ‘high’ and ‘low’ culture.  Greenberg was apparently a Marxist but he just comes off like a toff to my contemporary mind.

ˆParis is Burning is on Netflix, definitely worth 90 minutes of your life.

1 thought on “Sugar, spice and what’s not nice.”