I went to see this exhibition a whole 7 days ago.  Events of this week – more specifically, my lack of sleep and subsequent exhaustion due to events of this week – have delayed me writing anything longer than a tweet about it until now.  And it’s been a week which has put this already dark show through an even darker prism. 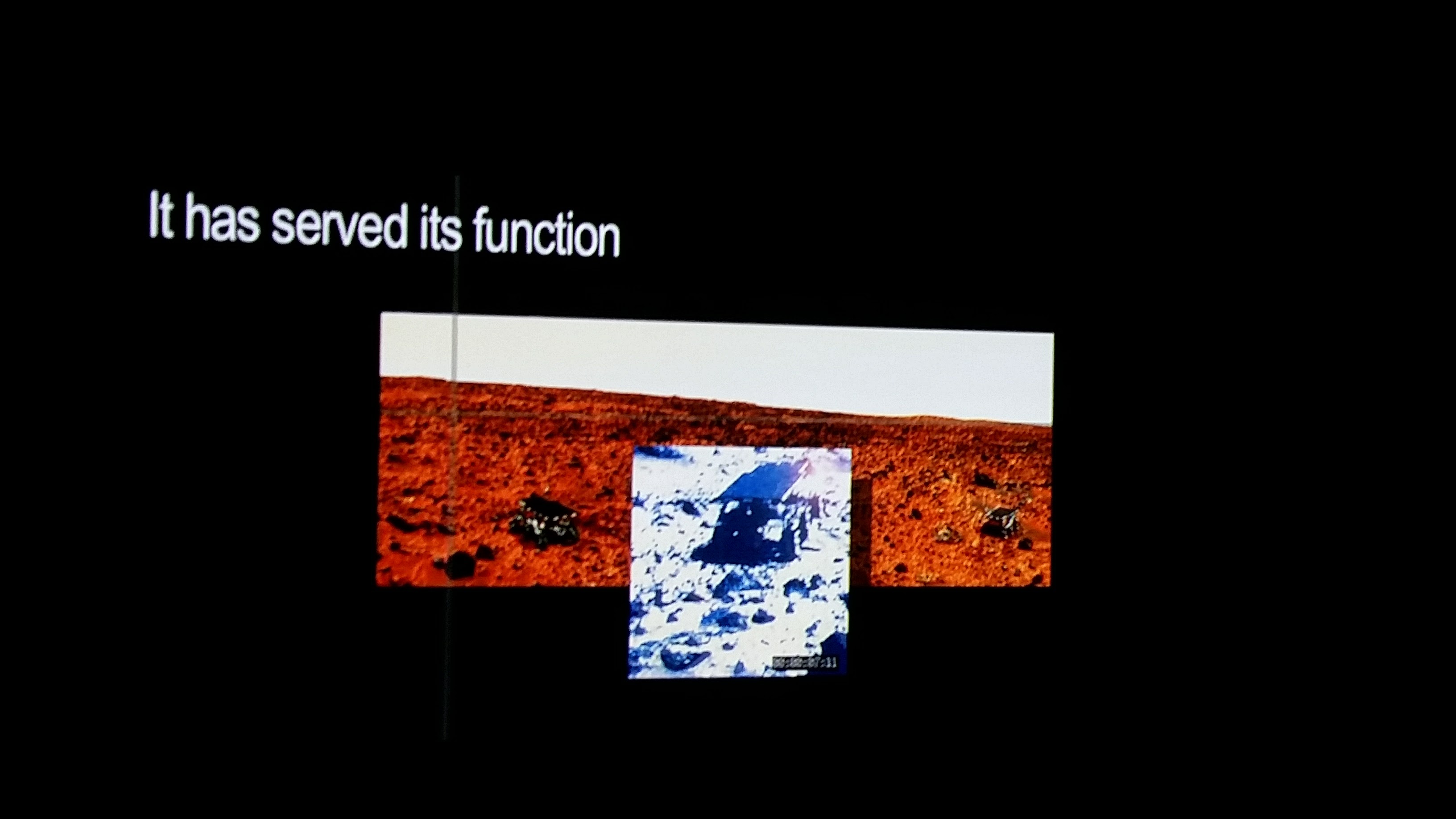 At first, it doesn’t seem like there’s much optimism to be found in Unearthing the Banker’s Bones.  Don’t think from the title that this is about a happy future in which just the scourges of society have been buried and forgotten – they’ve dragged the rest of us down with them.  Piper starts his apocalyptic fable from very real, contemporary points of anxiety.  If the mechanical star of The Little Robots Diary has no hope of a useful future, what chance do us humans have?

The main attraction of this show is a roughly 10-minute long film, displayed across 3 screens.  Piper’s starting point is post-apocalyptic narratives from authors Octavia Butler and Mary Shelley.   Like any good science-fiction writer Piper’s own concerns are rooted in real concerns about the nature of capitalism, who controls the money, and the subsequent economic migration of populations.  If this is how it starts then I’m worried: wasn’t Trump voted in, wasn’t Brexit voted for, due to concerns about these very topics?  Piper calls his shadowy banker protagonist a “trickster”, a phrase I have heard thrown at our politicians on more than one occasion.

But there is a glimmer of hope hidden in this narrative: it’s a dark fable, but it is only a fable – this desolate landscape doesn’t have to be the future. This is why art is so relevant, particularly in times like this.  Keith Piper is showing us a vision of “the worst that can happen”, and in doing so encourages us to think about what we can do about it.  This is a message supported by the final room, which is distinctly more colourful.  The banners on the walls and on the tables repeatedly use the word speculative.  We can change this future – we have the tools to do so.  Whether we manage it is up to us.

Of course, this message is only transmitted successfully if the artwork is engaging – which the whole of the Unearthing the Banker’s Bones exhibition is.  Both I and my friend came out of the show saying how much we enjoyed it.  There’s something very upfront about the images and narrative which not only makes you think, but looks good whilst doing so.   Keith Piper and The Bluecoat have created an exhibition which doesn’t offer an escape from our times, but instead successfully forces us to confront them.