Now I know ABACUS has been open a few weeks already, but there’s been purpose behind why I’ve put off writing about it until now.  You see, I sometimes volunteer as a Gallery Assistant at the Bluecoat.  This has put me in a good position to observe ABACUS in action.  Although it would have been possible to write more abstractly about the intentions of the show, I’ve waited until I’ve seen how the intended audience have been responding to it.

Because, unusually for a big city-centre exhibition, the intended audience for this show has an average age of about 7. 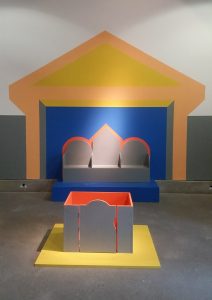 Courtroom by Emily Speed in “A Space for Play”

The thought of an exhibition for children may strike dread into the hearts of some.  Those people are foolish.  Challenging conventional notions of what a gallery is and who it’s for is something I fully support.  I’ve had multiple conversations with impressed parents and carers who have said they didn’t even know that Bluecoat existed until they found out about ABACUS – and more than a few who are on repeat visits.  When all the arts are looking for ways to involve new audiences, a show to which children (not to mention parents) are wanting to return to is a great start.

ABACUS changes what a gallery space is.  Take Gallery 2 – the “Space for Play”, in which Emily Speed’s structures are enjoyed by children of all ages.  Some of these children, though, have clearly been taught rules for museum & gallery spaces – specifically, Don’t Touch Anything.  And when they realise that they not only can touch, but that they indeed should…you can see how it changes their expectations of their day out.  It’s playing precisely into Speed’s intentions for her structures, which are all based on spaces which are associated with very specific, structured modes of behaviour.

But there’s aspects of ABACUS which can do us all some good.  We adults can be funny creatures, and I’ve found myself more than once dwelling on the question of when and how we learn to inhibit ourselves.  When I’ve been in Gallery 3 – aka “the chalk room” – I encourage all visitors to pick up a piece of chalk & have a go on the walls.  The number of adults who decline the invitation is disappointing, though not surprising.   If you visit, let yourself go – nobody’s judging! 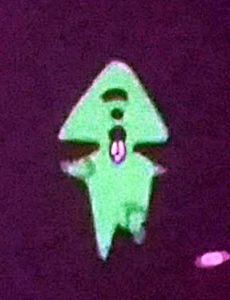 The childish influence is visible in the more conventional art here, too.  I particularly like Rhys Coren’s paintings along the Cloister corridor – they remind me of the late 80s/ early 90s cartoons I grew up with.  And then there’s Mashibatics.  Of all the films being shown in Gallery 1’s “Space for Watching”, there’s something about this one which stands out.  It’s simultaneously incredibly annoying and completely absorbing.

Despite me saying this, it’s still audiences under the age of 10 who are going to get the most from ABACUS.  But that’s the point – and from what I’ve seen, it’s hitting all the right notes.  Some of those children currently encouraging their parents to come back might come back to visit when this show’s over.  The parents who have heard about ABACUS as a great free attraction for the summer holidays might pop back in to discover something new on their next empty Saturday.  And you might be able to be convinced to pick up a piece of chalk and explore your own imagination.