I’m lucky enough to have attended an all-girls school where the idea that I’d meet stumbling blocks because of my gender never even crossed my mind.  And then I went out into the big wide world, where the reaction to sexist “banter” and even workplace bias tends to be resigned acceptance.  Pointing out sexist behaviour is still seen as socially uncouth, too confrontational.  In this environment feminism becomes, if not a dirty word, then a muted one.  We’re too dependant on inhabiting existing systems to want to rock the boat – and, being honest, sometimes too busy within the system to think about the actions change requires.

It may take one factor to jolt us into change, it may take several.  It may be that the #MeToo furore was already bringing these issues into my head.  But it happened to coincide with my return to study last year, beginning my MA in Art History.  And it’s this study that made me not just angry at patriarchal norms, but bored of them.  It’s boring to hear the praises of the same artists – Raphael, Monet, Picasso et al –  sung constantly. Where are the female voices?  Because it’s also boring to go around museums and only see three types of women: the rich, naked or suffering.

The argument against my boredom is that it’s not the men’s fault that the tropes of art history – saints, Marys, nudes – are what they are.  But this doesn’t stand up against two factors: the Genius and the Gaze.  The Genius narrative is, historically, never given to women.  As for the gaze – there are many, many places to start with this.  But for a super accessible entry point to thinking about how the male perspective of women is so damaging, look no further than John Berger’s seminal book for his 1972 TV series Ways of Seeing: 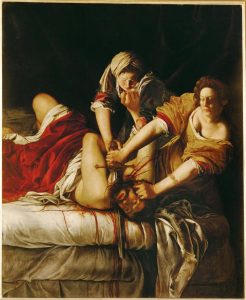 “To be born a woman has been to be born, within an allotted and confined space, into the keeping of men…A woman must continually watch herself.  She is almost continually accompanied by her own image of herself.  Whilst she is walking across a room or whilst she is weeping at the death of her father, she can scarcely avoid envisaging herself walking or weeping.  From her earliest childhood she has been taught and persuaded to survey herself continually….how she appears to others, and ultimately how she appears to men, is of crucial importance for what is normally thought of as the success of her life” (Berger, Ways of Seeing 2008, page 46)

“This unequal relationship is so deeply embedded in our culture that it still structures the consciousness of many women.  They do to themselves what men do to them” (Berger, Ways of Seeing 2008, 63).

When a male art historian in the 1970s is pointing this out, there’s clearly a problem here.

And it’s one which the art world, like so much of society, is still getting its head around.  The unpacking of feminist issues within the art world inevitably feeds directly into issues in everyday experience.  Take the furore a few months ago about the Whitworth’s removal of Waterhouse’s ‘Hylas and the Nymphs’.  Despite what the media said, it wasn’t an act of “censorship”: the plan was always to put the painting back.  But the hijacking of the original intention – to provoke debates about how women have been and should be represented in the era of #MeToo – in favour of a “political correctness gone mad” narrative seemed to be an attempt to deflect the question that was actually being asked.

And once you start asking these questions of the canon, it’s hard to stop.  My entry point was feminism because, as a white woman, this is the first struggle which comes to mind.  But what other perspectives aren’t we seeing? What about representation for those who don’t fit the patriarchal model in other ways, such as the queer experience?   I’m genuinely gobsmacked by the lack of self-awareness from feminists who stand against the acceptance of transgender people.  It seems utterly shameful, to fight against your own oppression whilst simultaneously maintaining discrimination against another minority group.   And then there’s the huge questions around the perceptions around art from different national and cultural heritages.  De-colonising museums is a huge issue which I’m saving for academic study and maybe a post another time…

Whilst I understand that it’s mostly male white artists who have influenced the perspectives of Art History, what I’m finding in my return to formal study of the subject is the extent to which some of these attitudes are unquestioned.  What I’m interested in doing is acknowledging their influence whilst simultaneously seeking out artists who can actually show me something new.  It’s doing this which makes art more accessible to all.  I’m still early in my journey and know I have a lot to learn, but without art I might not even be asking the questions that will hopefully lead to more intersectional understanding for all one day.

1 thought on “Let’s Talk About It: Art History’s intersectional problems”