Leo Fitzmaurice: Between You and Me and Everything Else, Walker Art Gallery, until 17th March 2019, free

The Walker’s newest longish-term exhibition has nothing to do with Leo Fitzmaurice as a painter, but as a curator.  The results are – to my eyes at least – effective, but disturbing. 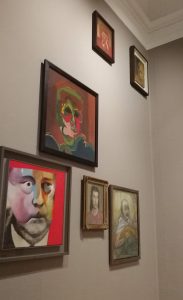 Fitzmaurice has scoured the collections of NML and the Arts Council Collection for portraits of sideways-looking sitters.  It’s a common pose and he must have been spoiled for choice, but he’s brought together a diverse cast of character.  There’s men, women, children – all white, but this somewhat comes with the territory of traditional Western portraiture.  It’s not stuffily full of historical grandees, though this isn’t to say it’s not intimidating.  All the portraits on each wall are looking in the same direction, and I’ve rarely felt quite the odd sense of the uncanny I get from following the trails of their eyes.  Regardless of style, it gives them a unity as part of a mass movement.

So what is it that the masses are turning their focus towards?  When I walked into the room, I somehow managed to look at all the walls before turning to find out for myself.  It’s no secret that it’s Psamathe by Frederick, Lord Leighton – it’s actually right there in the press release, which I hadn’t read.  Realising that this is who they’re looking at bring a whole other dimension of creepiness into the room.  Forget the uncanny, there’s something distinctly uncomfortable about all eyes being turned towards this woman, who, facing away from us, has no idea that she’s been observed so intently.

I can already imagine the reactions of those who would think me wrong to feel this way.  The simple reading of it is that they are all admiring the painting.  Perhaps, they may say, they’re not even focusing on the figure of Psamathe.  Perhaps they’re empathetically relating to her staring out to sea, wanting to share in her thoughts and emotions.  Certainly this seems to be the focus of the official statements around the show, that what Fitzmaurice intends is to explore a “tone of inquisitiveness in the world beyond”.  And it’s definitely not part of the family engagement materials which greet you as you enter the room. 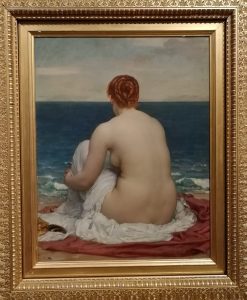 But in a climate fraught with discussion about women’s bodily autonomy, it would be harder for me to ignore the sense of intentful gazing in all of these eyes.  Even with women looking on too – after all, aren’t women often our own worst enemies and harshest critics?  These women may have been painted and undergone this same awkward observation themselves, but it doesn’t make them non-complicit in this particular observation.

Of course, this is as much a comment on the history of art as anything else.  What were Leighton’s intentions when paintings Psamathe?  Yes’s, she’s a subject drawn from Classical mythology, easily explained as a meditation on sitting in deep thought within the beauty of nature.  Why oh why, though, does she have to be nude?  I know I’ve said it before, but I do find it tiresome.  There’s not really an excuse for why she’s not wearing clothes- and it would make zero difference to the topic of the painting if it’s intention really matches these claims.  We therefore have to read it as a step in the dance between intention and titillation that art has performed with women’s bodies for at least the last 500 years.

Calling what Fitzmaurice has done here ‘disturbing’ sounds negative, but it’s not meant in that way.  I mean that there is undeniably something uncanny in the group mentality of the two main walls, the ignorance of the ultimate protagonist.  But this is an effective rhetoric, which provokes more interesting conversation than when the paintings sit independently of each other on the walls.