As somebody who moved to Liverpool in 2008, the general narrative of the city’s fortunes people give me is:

Of course, the real picture is far more nuanced than that – many of the cultural institutions already existed, and there were (as they always are) already people working to make the city better.  But status brings investment, and Liverpool is undoubtedly a city whose star has continued to rise beyond its year in the spotlight.

Quirkiness was hiding around the city if you’re looking for it.

There’s more that links Liverpool and Hull than just the M62.  Hull’s another city which has lost its industry, and which is no stranger to general derogation (even my Dad, who went to university there, warned me against ever going to Hull).  But there are big differences too: when I visited Hull this weekend, I was struck by a feeling that this was a city which had been unloved by anyone for quite a while.  The examples of grand Baltic-inspired architecture and cobbled streets were outweighed by ugly mid-century architecture and a clear lack of investment.  It would be a hard city for a visitor to feel affection for.

But even during my short visit I got a sense of optimism, that this year might really change things for them.   People are excited about the culture and, almost more importantly, about their city. 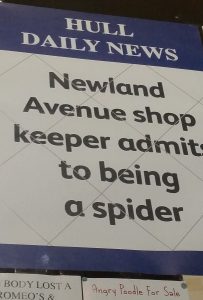 Signs in the Amuseagents installation were a particular hit with the crowds.

Let’s take the Saturday afternoon, walking down the Whitefriargate shopping street.  There’s nothing high-end here, lots of empty shops.  But the City of Culture has turned those empty windows into spaces for opportunity, rather than despondency.  Indeed it’s the installations which have popped up in each which were attracting by far the largest crowds, making the street feel lively.

Then there were the crowds out to see the last night of Made in Hull.  This was a series of commissions on a trail in various locations around the city, mostly after dark.  I didn’t have time to see them all, but I did see the main event: a light and sound show in the central Queen Victoria Square, telling the story of the city.  As a visitor it was fun but, as the title suggests, this was piece for the people of Hull.  It was a call to take control of what they’ve got and use it as a source of pride.  From the crowds I saw and the comments I overheard, it worked.  People of all ages were talking about how many people there were and how exciting it felt.  Stirring civic pride, and the mission of making the city great is one which must be supported by the whole population.  Made in Hull was a good start.

For art to survive and to legitimately call itself “culture”, it has to encourage public engagement.  This doesn’t mean dumbing down, it means making itself available to an audience who may not think to visit a gallery.  Made in Hull had done this on Saturday, and the crowds were out again the next morning to watch Blade.  The placing of this enormous cast of a wind turbine blade was an event which made national news and which symbolised a potential future for the city. 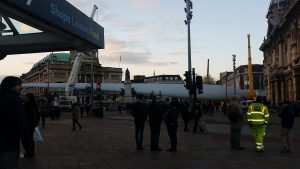 The (impressively large) Blade being moved into position, 8/1/17.

Because, of course, this excitement can’t come to anything without jobs and long-term growth, of course.  But just as the publicity around the cultural tag was a real boost for Liverpool, it may be doing the same for Hull.  It may be an unloved city, and on the surface it was easy to understand why.  But regeneration and hope is possible.  My visit happened to fall on the first weekend of the year, at the start of this adventure.  But the interest and enthusiasm for the City of Culture felt real.  If they can keep that feeling going for the rest of the year, who knows what they may achieve.  All I can do is wish them the very best of luck.

If you’re thinking about making a visit, information about all events can be found here.