You may or may not have heard in the news recently about the death of art critic John Berger.  Following this news I bought a copy of his “Ways of Seeing” to re-read.  Berger writes about art the way that I hope to be able to do someday, making it easy for anyone to understand.  The book’s first essay is mostly about the status of works of art in the modern age of reproductions, and the influence this has on our perception.  One of Berger’s points is that with the ability to reproduce art, comes the ability to shape and reshape a narrative about it.

“The meaning of an image is changed according to what one sees immediately beside it or what comes immediately after it.  Such authority as it retains, is distributed over the whole context in which it appears”. 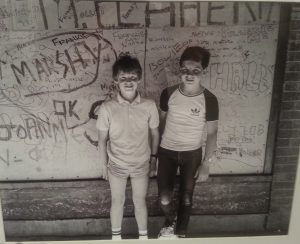 I’m telling you this because I felt it was strongly related to the purpose of Open Eye’s new exhibition.  So many cultural touchstones about “the north” are using the same narrative of it as an industrial, working-class, deprived place: to use an all-to-common phrase, grim.  And whilst this may be true in some places still, and may be part of the heritage of others, those of us who live up here know that there’s so much more going on ‘Up North’ than that.

It didn’t seem to me North: Identity, Photography, Fashion is denying these aspects of life here, but it is trying to change how they’re perceived.  This is where that Berger quote comes in.  A newspaper might choose one of these images – say, something from Stephen McCoy’s Skelmersdale 1984 series, to promote the idea of The North as a run-down place.  These works are included here to give a full and honest narrative of how photographers have perceived life in the North.  But they lose their status as depictions of grim by the works hanging alongside them.

The photographers here aren’t looking at their subjects with rose-tinted spectacles, but with honesty.  The story comes from the way their subjects are so diverse – and, crucially, completely unashamed of who they are.  For example, I was particularly struck by a large photograph of a girl, taken be David Sims.  Something about her hair, her tan, her eyes, makes her instantly recognisable as a Liverpool girl.   But there’s no shame in her eyes – why should there be?  For all that it’s mocked in London, I love the ritual and effort of dressing up for a Saturday night which exists in Liverpool like no other place I’ve been.  It’s part of this girl’s identity, and she’s rightfully holding her head high.  Just at the city should, whatever the Daily Mail thinks. 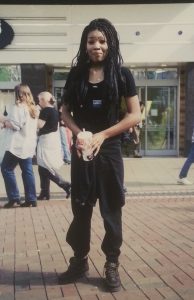 Diversity of all kinds on the streets.

There’s plenty to celebrate elsewhere too.  Any exploration of the North’s culture would be incomplete without some of the region’s musical heroes – although I did find it a little odd that they only included ones from Manchester (but that’s a whole other essay).   Then there’s the room dedicated to fashion.  There’s tracksuits, trainers and a puffa jacket: all from the recent collections of high-end designers.  These didn’t strike me as particularly special, but that is probably only because it’s a look which is so familiar.

When it comes to asking what the influence of The North actually is, the upstairs space is a particularly interesting way of exploring it.  It consists of interviews with successful creative people who have come from cities across the region.  You might have to wait to listen to any of their stories on headphones, but it’s worth it to .  The same message comes again and again: they’ve been fundamentally shaped by where they’re from.  Liverpool designer Christopher Shannon talks about how being Scouse gave him a different outlook to his fellow students at art school in London.  Gareth Pugh describes Sunderland with more affection than I’ve ever heard. 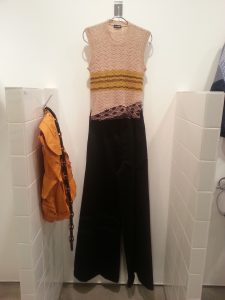 These are the narratives that images such as John Bulmer’s famous Mill Girls need to be hung against.  Open Eye Gallery is not denying what The North is, but demonstrating how this unique sense of place is much more than a negative stereotype.  Instead it’s an influence, a cultural outlook, that the rest of the world is now buying into (my friends from Down South tell me they’re even seeing girls wearing rollers on Saturdays).  Maybe this affirmative exhibition is a sign that after decades of being mocked culturally, The North is having the last laugh.