Life, Oh Life indeed.  I went to see this exhibition last week, but events have well & truly got in the way of me writing about it until now.  Confirmation (as if any was needed) that mantras about being able to do anything with positivity.  Working 7-11, considering time to put the washing on a luxury, will throw a spanner in the works of even the best laid plans.

Not that most of what you read on the internet will tell you this.  Every time I read about a successful person, it strikes me how much they fit into their day.  “Efficiency is success!  Work out for the win!“, they seem to say.  It’s a method I can’t buy into – quite frankly, I value my sleep too much.  But I’m still left with a feeling of inadequacy.  It’s exactly these constant modern anxieties, and how we react to them both as individuals and a society, that Life, Oh Life explores. 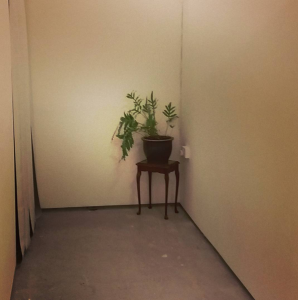 Living, but drooping unless watered – even the plants give off mixed messages.

Each of the three featured artists uses contemporary methods – no painting here.  Instead they manipulate and subvert the mediums and languages they seek to critique.  The clearest example of this is Lucy Vann’s I know that something is wrong but i’m being told nothing is found.  I can’t be the only person to have searched for the truth of various health rumours (and am still taking suggestions for hangover cures).  But the quantity and size of these walls of google searches highlights their absurdity.   Vann’s other pieces in the show explore the ways in which people try to find their own answers to the questions but, as her amusingly unimpressed face in Gentle Light Therapy shows, these have somewhat underwhelming results.

But if you can’t succeed in this world, nowadays there’s no need to worry – you can just create your own, and Andy Nizinskyj’s Serious Observations is probably the most alluring piece in the show.  This soft-voiced reflection on the world of video gaming is comforting, painless, and lets you fulfil your fantasies.  If you didn’t know any better, you’d almost think you were being sold a drug.  Which is precisely the point – and to some, the allure of these worlds in which you are in total control, is as addictive as anything illegal.

All of this sounds quite depressing, doesn’t it?  As though there is no true solution to First World Problems, only temporary relief.  Except, there’s Reece Straw’s Monty.  If the other parts of this show put you on edge, this film seems comparatively easy.  It’s a man telling you the story of his life – his rather extraordinary, diverse life.  And that’s it – a record of a life well lived.  Not worrying about whether this cream or that avocado will make you a better person, but creating something worthwhile just by living and being.

The thing about all of this art is, that it’s not really telling us anything new.  We should know that a light, a song or a game don’t really provide long-term fixes.  The fact that we don’t (as our continuing actions would seem to suggest) is why art is necessary, even if you don’t feel a particular warmth for its form. Until we collectively decide to start looking at the big picture and stop getting caught up in the petty details of life, shows like this must continue to provide a wake-up call.