For all I love living in Liverpool, I am very aware that it’s a city with problems.  One of the most depressingly familiar issues is the interminable encroachment of student flats and Signature Living.  Have we not reached saturation point with these yet?  I know that the night-time economy is crucial for the city’s economic flourishing, but how many dedicated apartments do they need??

I say this because over the years I’ve been to several parties, music nights, studio shows, breakout rooms and lunches in the Crown Buildings.  It’s suited what it is for all that time – not well-maintained but central, accessible and easy-to-find.  And now it turns out that Signature-Bloody-Living are taking over the whole building.  Because that’s what the city centre needs.  Not to support what makes Liverpool a creatively thriving place to live, but another apart-hotel within a stones throw of Mathew Street, so the partygoers can make the walk home before vomiting. 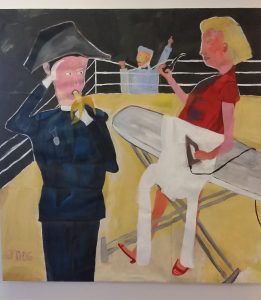 The whole business makes me angry.  And OK, the attitude seems to be that the Baltic Triangle is the new area for creatives.  Fine, except the developers have got in quick there, too.  And the cycle goes on.   But for now, that’s where the CBS team are headed.  This show by Joana de Oliveira Guerreiro is their last one in Victoria Street.  It’s a great show to end on, though.

When you arrive, take a copy of the artist’s CV – it’s quite a thing.  Oliveira Guerreiro is pretty new to art, having spent her early career working with NATO.  She hasn’t dropped this interest in politics, though.  Art just gives her a prism to make her voice, and opinions, heard.

This isn’t a big show – just 5 paintings.  But they’re 5 paintings which have been curated by Gabrielle de la Puente to give us an idea of the artist’s political interests.  Feminism, or rather, male perceptions of woman, is clearly an important concern.  Then there’s her interpretations of the military, which with her background I’m sure she knows plenty about.  Oliveira Guerreiro’s soldiers all come across as rather absurd, blustering figures.  But her painting style brings an edge of darkness, with colonial undertones.  She’s clearly influenced by  20th-century Primitivism, like early Picasso.  Her figures have the same facial features, based on African masks.  The limbs are in the same awkward angled positions, turning the figures into statues, nothing more than objects. 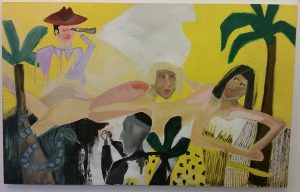 So there’s a lot of political messages going on, but don’t let that put you off.  These paintings are very attractive with their bold colours and strong figures.  You might be uncomfortable with what the figures are doing, but you still want to look at them.  So their strong political messages become easy to digest, without being diluted.

“Gulab Joana” may be quite new to art, but based on this evidence, she could have a bright future.  Her politics are clear without being dictatorial, and her style has a distinctive, broad appeal.  I hope the CBS move works out, and that artists such as Joana continue to have spaces to experiment and thrive in the city.