How Much of This is Fiction, FACT, until 21st May, free.

I may be outside of the “art world”, but I know that exhibitions don’t appear out of nowhere.  Once an idea for a show strikes there’s exhibits to be sourced, contracts to be signed, installation to take place.  My understanding is that in major galleries, this tends to take a year or two.

This makes the relevance of FACT’s latest exhibition, How Much of This is Fiction, particularly striking.  Maybe Brexit bus lies and Donald Trump’s “Fake News” obsession were more grimly predictable than many of us realised, because it’s hard to think of a theme for an exhibition which is so in tune with contemporary international concerns.

It’s relevant, but is it any good?  Does it approach the topic in a way which will say something about the subject and, crucially, engage the public? 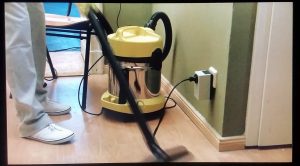 Newstweek: manipulating the news, right under your nose.

FACT’s exhibitions always focus on the relationship between art and technology, and a high percentage of the art on display here is films and recordings.  The main difference, to me, between a static artwork and a film is that a film demands your engagement.  Looking at a number of paintings on a gallery wall, some will catch your eye more than others, which leaves some to be passed with disinterest.  With a film though, you don’t know what it has to say until you sit and watch it.  And they are worth watching, so leave yourself plenty of time to visit and be able to take it all in.

The show features pieces in a huge range of methods and contexts.  Ultimately, though, How Much of This is Fiction deals with its brief through what I will describe as loose “themes”. 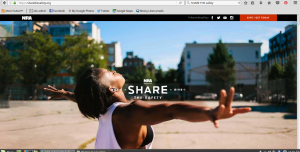 Share the Safety: don’t believe everything you read on the internet

Firstly, it shows the scope that technology has to directly affect and influence our lives.  Before you think “we know that already!”, there’s a difference between knowing something and realising it.  I know that the planet is big, but it’s not until I’m sitting on a plane for hours that I realise what that means.   Even when we know that technology impacts upon our everyday, but what is it doing?

One of the most terrifying aspects of the show is just how easy it seems to be to manipulate our world.   Is that man speaking on the TV really who he says he is?  In The Yes Men’s Dow Does the Right Thing, not exactly.  Also in Gallery 2 is a piece called Newstweek.  Using a series of apparently innocuous plug adaptors, artists Julian Oliver & Danja Vasiliev could manipulate the news being read by people nearby on their smartphones and laptops.  The changes in the language of the headlines look so small, but they can completely change the perception of the story. 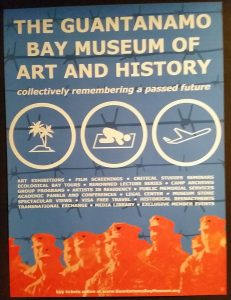 Then there are the outright lies which look like the truth.  Ian Alan Paul’s Guantanamo Bay Museum of Art & History comes with professional-looking posters, web facts and links, literally intended to “will” the museum into reality.  The thing is, this manipulation of the truth for what I, and presumably most other liberal thinkers, would describe as “benevolent” reasons, such as ending a regime of torture.  But if it’s this easy for it to appear real, what happens when somebody with less benevolent ideas comes along, wanting to do the same?

So much for the how, but under what circumstances does reality become distorted?  What is truth – something we know, or something we experience?  I was totally absorbed by Coco Fusco’s film Operation Atropos.  The way the interrogators create the reality they want to believe in through both words and actions is compelling.  You could almost start to think: does it matter if it’s true?  If we don’t have the ancient city of Palmyra, but we do have Moreshin Allahyari’s 3D printed copies in Material Speculation: ISIS, which one is truer?

To answer the question I asked at the beginning: How Much of This is Fiction is very good.  It’s thought-provoking throughout, and in more than one place somewhat sinister.  If the problem with modern political discourse is that audience’s don’t question what their news sources tell them, then the way that How Much of This is Fiction makes you question everything can only be a good thing.  Don’t take that as paranoia, take it as a necessary antidote to the world we’re living in.

1 thought on “My truth is better than your truth”