A Small View is open 1-5 Saturdays, or by appointment.

If I could have any skill, it would be a talent for languages.  I’m not as jealous of anybody as much as I am of bilingual people.  I’ve studied French, Spanish, German, Russian, reaching a fairly low standard in each.  I do know enough Russian to get by abroad, even hold simple conversations.  But when it gets to a certain level of natural vocabulary, phrasing and speed, my comprehension – and ability – fall apart.

This is sort of how I felt at A Small View’s latest show.  Garth Gratrix’s CAMPGROUND is “queer art”, about his experiences of gay dating.  I am delighted and respectful about the fact that queer art exists, that the freedom of self-expression is becoming more visible and widespread.  But I do confess that as a straight woman, this is not my area of expertise. 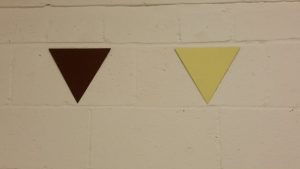 So in some ways, this exhibition feels just like when I try to converse in a foreign language.  I get the gist of what’s going on – references to 9 inches are pretty self-explanatory.  But I feel like there’s a level of understanding that I’m missing, that I’m somehow not getting the full picture.

This may be partially to do with Gratrix’s minimalist style.  On the one hand, this brings the good into focus.  I like the colour palette very much, as much for the cheeky innuendo of the names (Chestnuts in the Park, anyone?) as the pretty colours.  But it also reduces the message to symbols of measurements and triangles, which will have deeper significance for some people than others.

I’m not saying that this is bad art, but that it felt like I’d landed in the middle of the foreign country without the language.  Gratrix’s work is soon to be included in Provocations, a group exhibition in Blackpool about queer art in the UK.  I feel like exploring a wider narrative first, rather than this personal perspective would have been a better introduction to this world for me. 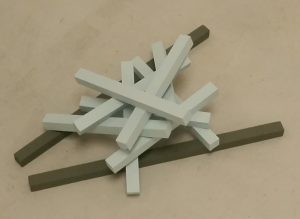 So this wasn’t entirely up my street, but that’s OK – it’s not art for me.  And how boring art would be if it was only ever made for middle-class straight white people.  A diversity of perspective makes art a stronger, more interesting world to discover and explore.  CAMPGROUND may be challenging to understand if you don’t have Gratrix’s experience, but as the public becomes more aware of the queer art scene, maybe it’s up to us to learn the language.

Incidentally, this is the last exhibition in A Small View under current management.  I’ve met Ben a few times now and he’s always been a thoroughly nice guy.  With Kelly Hayes, and for this exhibition Laura Brady, A Small View has been a great space to discover artists whose work I wouldn’t necessarily come across.  The space will continue to exist, the curators will continue to work on other projects, and I very much look forward to seeing the next chapters for both the space and the people involved.

1 thought on “Picking up the lingo”