Notes on Queerness, until 26th November, The Royal Standard, free

I asked: the universe answered.  Ever since I wrote in my piece on Campground a few months back and discussed how I didn’t know much about queer art, Liverpool has been doing its best to teach me.  And so now we’ve reached the opening of the Homotopia festival, a showcase for arts and events by LGBT+ artists.  I’m sure I’ll be along to some more of their events across this month. 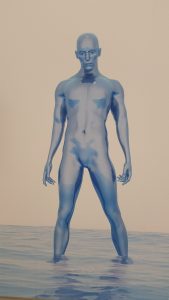 If, like me, you’re still becoming familiar with the perspectives of LGBT+ artists, and what kind of artistic responses that identity inspires, I’d still recommend you start at Coming Out – but Notes on Queerness should be the next stop on your list.  Because The Royal Standard’s latest show comes from quite a different perspective.  Coming Out is a celebration of the political – bold public declarations that this alternative voice is here.  Notes on Queerness is, in comparison, about the personal voice.  It feels like an emotionally honest about the lived experiences of these artists.  So it’s not political in the same sense of pushing forward a grand narrative.

But this personal perspective is what’s behind the show’s success. This isn’t queerness which defines the artist as somehow “other”, but instead a look at the everyday emotional reality that the identity brings.  And very often, you meet a person you recognise.

Take the work by Emily Pope; 3 TV screens, showing films (maybe 3 films, maybe 1 out-of-sync, I couldn’t work it out).  She’s shows us clips of herself talking, scenes from her own life, framed within the vocabulary of a “sitcom”.  And in this vein, the stream of consciousness she speaks veers between the funny and neurotic.  You can pick up a piece she’s written, Not Your Circus, which is very much the same.  She’s down-to-earth, funny, a person I feel like I’ve at least met before.  Hell, with her sense of self-checking, I’ve been her at some points.  Her starting point may be her gay identity, but the work is about the complex emotions of being a person.

The same can be said for the work of Jake Moore, for whom queer identity is only one level of his work.  His blue digital figure is a representation of the uncanny; almost human, but not quite.  It’s like doesn’t quite belong, feels cut off from the world. And queerness may do this to a person – we do, sadly, live in a world where to be LGBT+ is to bear the disgust of many.  But Moore’s own website explains his imagery as being linked to the abstraction of the digital self.  Feeling part of something and yet not, denial of reality in favour of hyper-real digital production, are once again universal feelings that cross boundaries of identity. 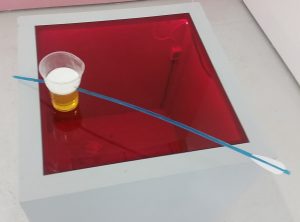 With all this talk of relatability, please don’t think I’m trying to piggy-back on any bandwagon.  I’m not saying that I can understand the particular anxieties which being LGBT+ can, under certain circumstances, bring up.  Proof of this is in the posters of Travis Alabanza, which express emotions I can’t even imagine having to experience.  Alabanza is fed up.  “How many stares = a punch?”, he asks, in response to a low-level but consistent violence and invasion of self that most of us will never know.  He lets us in on his personal experience of prejudice.

And then there’s the work by Alexander Glass, to which I had the strongest emotional response. He explores the potential for the horrific within spaces of idealisation – in this case, a nightclub. In this sexually-charged space, Cupid’s arrows have gone somewhat awry – limply discarded, trashing the drinks.  It’s work which makes me feel sad, sad for hopes and dreams gone wrong.  I’m not sure a non-LGBT+ artist could have made this artwork.  The straight world of sex and seduction is, too, based on illusions and lies – but this dirt has, in itself, become a stereotypical part of the problematic representation.  Besides which, straight sexuality doesn’t come with the same insecurity – the hopes lost here would not be the same in a strip club.

None of the work here is activism in the traditional sense, but it is inspiring by example.  Rather than bold political statements, we are let into the emotionally honest experiences of these artists.  Feeling a sympathy with these emotions isn’t to negate the uniqueness of queerness but, rather, to identify with queer as a personal identity rather than a political catch-all.  Notes on Queerness is a massive, sensitive success and I encourage you all to visit.

1 thought on “Out in the world”