Inspired by Tom Wood: The Pier Head, Open Eye Gallery, until 25th March, freeMy review of this exhibition can be found over at Art in Liverpool.  What stayed with me about the show was actually the ordinariness of the people.  I couldn’t help but wonder about who the people were and what they might be up to.  This is one idea.

All images are my photos from Open Eye Gallery.

“The world leaves the quiet people behind,” her Dad often complained of her. “Thank goodness” thought Cat, as the group walked past.

It wasn’t that they’d ever said anything to her specifically, but she’d seen how they’d been with some of the other girls at school. Last term it had been Annie who’d caught their attention. They’d quickly got bored, but Annie was definitely more of a worrier now. Cat had noticed how often she stole surreptitious glimpses into reflective surfaces, checking that everything was exactly the way it should be.

So Cat knew to be wary. At school she had a better chance of blending in, but here she had to be on her guard. She couldn’t spot anyone else from school who might capture their interest should they seek entertainment, and there was nowhere to hide until the boat came. 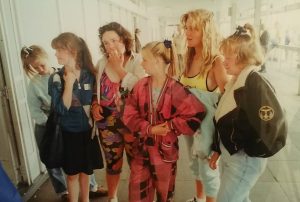 One valuable lesson Annie’s experience had taught her was that trying to hide by deliberately making yourself small didn’t work. It raised its own kind of flag as something to be looking out for. So for the last few months, Cat had become a devout student of how to blend in. She observed what the trends were in school and on the street, how other girls held themselves, and tried her best to imitate it. Her parents put her new-found interest in the magazines down to teenage vanity, but it was anything but. For Cat, fashion wasn’t about standing out: it was about blending in.

Besides, it was a gloriously sunny Saturday afternoon, and the ferry terminal was bustling with people out for the day. Staying focused on her magazine was almost impossible amongst the commotion of shouting children, too excited by the promise of the trip ahead to listen to their parents’ request that they just stand still. Nearby, a group of lads in black tracksuits looked sweaty, a black tracksuit not exactly being the ideal outfit for the weather. A few older women, even on a glorious day like this in macs and huddled over cups of tea as though a blizzard were blowing in.

The boat was almost back over from the other side, close enough for Cat to start picking out bodies on the top deck. On days like this, the ferry was the obvious form of transport: better than a sweaty train carriage. She studied the shapes, observing the colours. Somebody’s tshirt was in a beautiful shade of green. She loved green and this shade, more aquamarine than grassy, was perfect in the sunshine. She made a note to look for something similar.

People were starting to move, and Cat was jolted from her studies by the sound of familiar laughter. A loud group call: the expected response to a joke which, in her experience, was more often than not unkindly aimed at someone she knew. For a second or two, she froze. She started taking herself through what she would do if they came over. What would they even say? She had, as she did every Saturday, chosen her outfit with care. Her pink-top-and-blue-jeans combo couldn’t be their object of ridicule, surely? What else had they singled out? She started running her finger through the ends of her ponytail. She’d put so much effort into her choices today…But they must have been laughing about something else, for the calls her way didn’t come.

She realised she hadn’t been breathing. 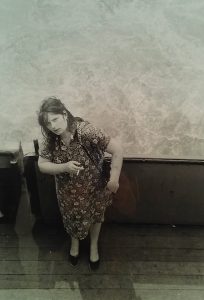 Finally looking across to follow the sound, she saw that the girls were a decent way ahead of her getting on the boat. She chose her seat on the other side of the deck, then sat down. Cat felt more relaxed on the ferry. People naturally spread themselves out: the old people stayed downstairs, along with the parents who were most worried about their kids throwing themsevles over the railings. The deck tended to be self-contained groups, or quiet individuals like herself. She’d been on the ferry of a Saturday more times than she could count. even on her own for the last few years. She remembered so clearly how exhilerating it had been first first few times she’d done that. It had been like walking without her shadow: a feeling of liberation. It was different now that she’d grown up a bit: learning more about the world had made her worry more. Another good reason to blend in.

And she was blending in, she thought to herself. Hers was not the easy intuition about how to look right, but she had studied diligently and learned well. She saw a young woman over by the railings, a vision of bold, dark curls – and her skirt! And over there: didn’t she have that jacket in a different colour at home? I’m learning well, she thought to herself. Everywhere around her was proof that she could blend in, be one of the crowd. Her parents and teachers may complain that she was a shrinking violet who wouldn’t say boo to a goose, but up here she could pretend she was somewhere else.

She let the journey pass by quietly, feeling the sun on her face, giving her thoughts up to dreams of the type of person she could perhaps be one day.

Then the boat was pulling up again. People anxious for this pause in their busy days to be over were starting to move towards the stairs. Usually Cat would let them all go first, but today she joined them. ‘Why shouldn’t I?’ she thought. Who’s to say I’m not just like them? She chose her steps carefully: not too fast, or slow. Polite when letting people past, but trying to be assertive about moving her own way (a skill which she’d have to practice). Here she was, waiting to leave the boat, just like everyone else, off out on this glorious Saturday –

– and there they were, coming down the stairs on the other side. She’d been so focused on the other people that she’d almost forgotten about them. This time there really was nowhere to hide. This is where blending in would have to count for all it was worth. In less than a minute she’d be safely off the boat. She had the better position, there was definitely time to get ahead, if she kept looking forward they’d never pay attention to her.

There had, though, always been the chance that they’d try to push through the crowd themselves. And, taking their cue from the movements of the first people in line, they did just that. It must have been Jenny’s elbow that caught Cat’s arm because it was Jenny who looked back, Jenny whose eyes she met. Twenty minutes before, Cat had wondered what she’d do if they clocked her, and now she found the answer. She smiled. Jenny looked at her blankly, saying nothing, then turned back. As she was walking off the ramp Cat saw her turn to Charlotte, saying something: and they both looked back. 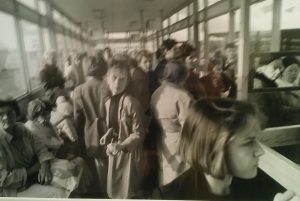 She became aware that she hadn’t moved with the crowd, that now other people were trying to push past her too. But she didn’t want to get off and go shopping now. What was the point? Whatever it was she was doing, it was wrong. And she’d tried so hard. What was the point, if it was still wrong? The thought of school on Monday was an unwelcome intrusion into Cat’s mind which left her feeling sick to her stomach. She’d come to their attention now. What that meant she couldn’t be entirely sure of, but she sensed it was nothing good. Because it didn’t matter how much she blended in and looked the same as the others now. She’d come to their attention, and she was not One Of Them. In that look, Cat felt as though all the clothes in the world were a sham. They’d found her out anyway.

“The world leaves quiet people behind”, her Dad said. How Cat wished it were true.