Open Friday-Sunday 12-5pm or by appointment

The more I’ve thought about Tabita Rezaire’s Ultra-Wet – Recapitulation since I saw it on Saturday, the more pleased I am that it exists precisely now.

At any time, it would be a striking design for an installation.  The room is dark, occupied by a single large pyramid constantly covered in projections.  Staying in one spot, the reflective walls give you a distorted sense of what’s appearing on the sides you can’t see. 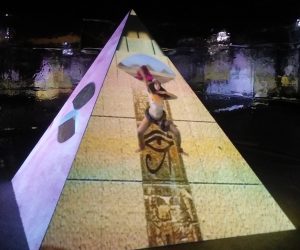 Rezaire describes her practice as “unearth[ing] the possibilities of decolonial healing”.  What this means, judging from Ultra Wet – Recapitulation, is that she wants us to accept each other as equals, specifically here in terms of gender.  I’m going to include the whole quote from the flyer here, as I think it’s so key:

“You are a balanced being, meaning that your feminine and masculine energy are of equal measure. Yet your masculine side feels like a scared little boy, as your feminine is virulently taking over. That makes you energetically unbalanced. It’s good to want to crush the patriarchy but it shouldn’t be at the expense of the masculine all together. You need to find a way to still celebrate the masculine and understand deeply that this energy is as necessary and valuable as the feminine. How will you grow this terrified little boy into a blooming man?”

In the age of #MeToo, this is important.  I’m watching with pride as women raise their voices to condemn the way things have been.  But we must not just condemn what we don’t want: we also need to take control of asserting what we do.  Do we want ultimate authority, a la Naomi Alderman’s The Power?  Or do we want a genuine equality where everyone’s balance of masculine and feminine is equally respected across the scale of gender?

And let’s talk about what the terms “masculine” and “feminine” even mean.  Writing this piece, I’ve thought a lot about how concepts of these types of energy have traditionally been so harmful.  Particularly (of course) for women, who have been boxed into domestic and maternal roles.  But society has got to the position we’re in now in no small part thanks to the association of masculinity with strength and asserting power.  It’s as stupid and reductive an idea as the belief that all women are delicate flowers.  What parts of these old ideas do we want to lose, which to keep? 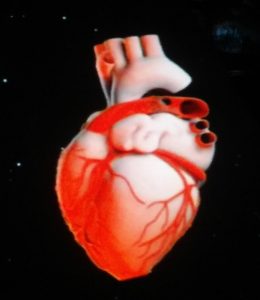 Ultra Wet- Recapitulation explores this through a plethora of symbols.  Pole dancers, lions, computer graphics and flowers are all used not simply as what they are, but also to explore what they could mean.  The lion: symbol of masculine strength and bravado.  Here seen resting and licking his paws, gentle, until he roars.  It’s an appeal for intelligence, to know when to ‘be’ the lion.  On the feminine side we have a pole dancer as a narrator of some of Rezaire’s ideas – because if it makes you feel good, that should be OK too.  That she also narrates her philosophy is useful, reminding you of the philosophical grounding of her ideas.

The distorted reflections cast off the walls are a fairly obvious, but effective, metaphor for how we don’t always understand the full picture.  The shape demands that you explore, that you see the narrative from different angles.  I watched two cycles, and found new and different ideas in both.

There will be those who say that this approach of balancing and healing doesn’t go far enough.  I’m writing this on the Monday after the Grammy’s.  Being questioned about why so few women were acknowledged, the Recording Association president has said: “It has to begin with… women who have the creativity in their hearts and souls, who want to be musicians, who want to be engineers, producers, and want to be part of the industry on the executive level… [They need] to step up because I think they would be welcome.” (source: Variety).  It’s the blindness to the fact that so many women are ALREADY DOING THIS that is staggering, that shows the mountain that has to be climbed.

But in the long term do we want war, or a new narrative?  If it’s the latter, we need to talk in a language we can all relate to and understand.  Ultra Wet – Recapitulation won’t be the definitive answer to the question of where we go next, but it’s a vital starting point to the next phase of change.