People sometimes ask me what makes art “good”, – a question I always find it somewhat tricky to answer.  For me, “good” art is art which first and foremost has an impact on my emotions.  It’s about it bringing me into a mood or place where I like to be. 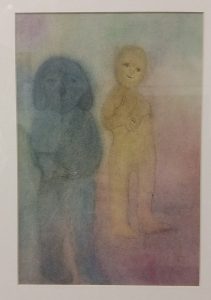 Oh was the first exhibition I’ve visited at Bridewell Studios & Gallery.  And I liked the place it took me to very much indeed.

The show brings together the work of four local artists: Jason Thompson, Penny Davenport, Chiz Turnross & Tina Connolly.  They’re not artists who work  together  per se – but their art works together.  In this small room each piece complements all the others alongside it.

I’ve tried to decide from a multitude of different words to describe the overall effect, without being fully satisfied with any one.  I think the closest I’ve got is “shamanic”.  It’s not perfect, but it captures something of the quality of dream-like mystery these works share.

The use of patterns definitely has something to do with this.  Jason Thompson’s highly-glazed slices of abstract symmetry remind me of American First Nation artefacts I’ve seen in the British Museum.  Those have a symbolism that we see without fully understanding, and it feels like the confluence of lines may be aiming for a similar meaning beyond their surface.

Tina Connolly’s drawings are full of pattern too, on a smaller scale.  Like Thompson’s works they can be appreciated both from a distance and close-up; the shorter the distance, the more you notice the attention to detail.  I find the fact that she works in marker pens an interesting choice.  It breaks down an academic boundary of material – felt tips are one of the artistic mediums everyone accesses from a very early age.  This – and the flowing, daydream-doodle aspect of her work – imply a certain universality. 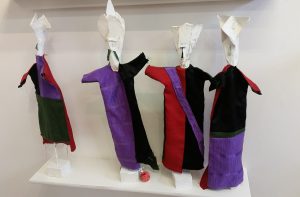 Chiz Turnross’s puppets are like High Priests of the Uncanny.

Then there’s the figures which take you into the world of the uncanny.  The characters occupying Penny Davenport’s paintings are sort-of familiar, but at the same time are not part of our everyday world.  Being rendered in muted watercolours makes them seem even more like dreams, or visions, maybe even spirit guides.  Either way, I’m not scared of their purpose.

Can I quite say the same about the intentions of Chiz Turnross’s puppets?  I think that as humans, we’re always more unnerved by objects such as these, which are nearly (but not quite) human.  They look wonderful on display on their shelves, but I still don’t quite trust them.  Supernatural spirits of all cultures are often of ambiguous morality, and these feel like they fit into that pantheon.  Rumour on Oh‘s opening night was that their will be a puppet performance at some point of the exhibition, which I would be very keen to see if it happens. 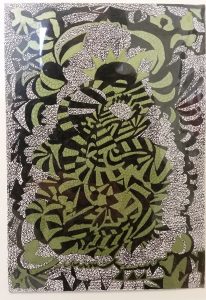 This show is set in a small room with no information or context.  This is not a bad thing.  It gives you space as a viewer to be able to draw your own connections between the artists and their work.  Each artist has produced good work in their own right, which just happens to click beautifully in the context of this space.  I might well visit this show again when it’s less busy, just to see what other paths of thought these works take me down.